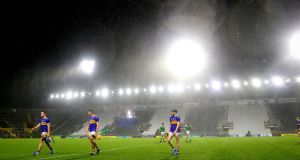 It was hardly going to be a revelation that rain might fall in an Irish November but for the GAA, the threat of it was a concern given how tight the intercounty fixtures calendar would be this winter and the consequent limited scope for postponements.

At this stage there must be rising hopes that the danger has passed as after this coming weekend, all fixtures move to Croke Park for the All-Ireland stages.

It’s not contentious to venture that the star of the show in terms of surfaces has been Páirc Uí Chaoimh in Cork, which has hosted two matches in particular that were scarcely visible at times behind the sheets of rain.

Limerick-Tipperary in the Munster hurling semi-final and the Cork-Kerry provincial football final, that for good measure went to extra time, both came through with the pitch holding up remarkably well.

Stephen Forrest is the stadium groundskeeper and believes the downpours were opportunity as much as challenge.

“It was crazy, wasn’t it?” he says about the rain. “It played into our hands in a way because it was a fantastic opportunity to showcase the pitch after its redevelopment. On the one hand it was terrible weather conditions but it highlighted the work and investment that had been put in by Cork county board.

“When the stadium was rebuilt [in 2017], the playing surface was sub-standard at best. It performed reasonably okay because it was a summer opening but the construction caught everybody off guard and afterwards the surface wasn’t coming on as quickly as it needed to.

“Credit to Cork GAA. They went back to the drawing board, designing a new surface specifically for Páirc Uí Chaoimh and its environs. Now they have a surface that’s fit for purpose all year around and worthy of the stadium.”

The work was completed in September of last year and Forrest and his team were involved in liaising with the pitch suppliers.

“SIS Pitches were contracted to construct the surface and we were lucky enough to be involved in the overseeing of the project and being a set of eyes on the ground.

“Páirc Uí Chaoimh is a stitched, hybrid pitch and it is on a gravel raft drainage system and sand root zone. It stitches hybrid fibres into the ground, which stabilises it and gives a very hard wearing, consistent surface.”

So, has the long shutdown, which meant that no matches were played for around four months benefited all pitches this year?

“It’s actually not the case,” he says. “If you have a surface like Croke Park or Páirc Uí Chaoimh or others in the country without anything being played on them, what actually happens is that you can get a build-up of grass and organic matter on the surface and it becomes a hindrance.

“If come winter you’ve a build-up of that, it holds on to huge amounts of water and equates to bad drainage and bad rooting, but with a careful budget and good management you can control the situation.”

Forrest says that the work has to be already done if a pitch is to survive extreme weather conditions at this time of the year because there is no growth now.

“There are months when the grass will not recover and any damage done to the pitch in the winter months will remain damage until the spring, but drainage rates are extremely high and water isn’t having a negative impact on it.”

This weekend sees Páirc Uí Chaoimh in action both days. Clare and Waterford meet in Saturday’s All-Ireland hurling quarter-final whereas on Sunday Cork take on Tipperary in the Munster football final.

So there’s a lot on his plate.

“We thought we were going to have no games at one stage so it’s good to have them,” he says.