No promotion or relegation in 2020 Dublin club championship 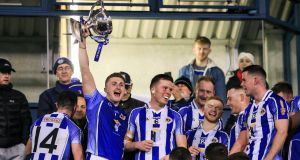 Dublin GAA will be pressing ahead with their existing club championship draws in both senior football and hurling, to be completed by the weekend of September 19th/20th, only without any promotion or relegation in either code.

Confirmation of the Cork and Kerry club competitions, the draws for which were made on Monday, further illustrated both the need and range of compromise given the still restricted club window in the face of Covid-19: the Cork championships, however, will continue to have promotion and relegation, as it seems will most other county competitions.

For now, Cork GAA have fixed both their senior hurling and football finals for the weekend of October 2nd- 4th, decided in part after Friday’s confirmation that their senior hurlers aren’t out in the Munster championship until the semi-final, against Waterford, set for October 31st/November 1st.

In the event a dual club making the latter stages of a championship, the hurling final will a final revert to the following weekend, October 9th-11th, the last available date prior to the commencement of the inter-county season.

This club window is now set to last 13 weeks, ending on October 11th. Inter-county training can only resume on September 14th, before the inter-county season starts on October 17th/18th, with the penultimate rounds of the Allianz Football League.

Dublin plan to have their county senior finals in both codes completed by mid-September, retaining their existing formats, which start with group round-robin games, and along the same senior draw that was made back in February.

The senior hurling championship will begin on the weekend of July 18th/19, with round one games, the football round-robin starting a week later on July 25th/26th, both codes alternating every other week from there, the exact fixture details to be announced later in the week.

Dublin county board chairman Mick Seavers also confirmed the decision not to have promotion or relegation, “because of the effect that could have on forcing people into trying to play games”, and where safety around Covid-19 will remain paramount.

“It’s been a long hard road, and a lot of work. It’s a fluid situation, and still is, but all credit to our CCC committee, we’ve come up with a very worthwhile programme,” said Seavers. However this also means will be no promotion or relegation in any championship across football or hurling this year which means winners won’t move up a grade, as was customary.

On that decision not to have promotion or relegation, Seavers added: “It’s not so much this year about winning, or anything like that. We’re very aware of the seriousness of the situation, so the committee’s decided that there would be no relegation, no promotion, because of the effect that could have on forcing people into trying to play games. Safety first is still the issue. We’re in the middle of a pandemic, and it’s by no means gone. So we’re very aware that safety of our players and our people is paramount.”

It was also confirmed by Croke Park on Friday that there be no provincial or All-Ireland series this year for any of the club competition winners, senior, intermediate, or junior.

The Dublin draws made back in February, as they stand, will see reigning football champions Ballyboden St-Enda’s take on St Vincent’s, Clontarf and Whitehall Colmcilles in their group, while hurling champions Cuala will meet Thomas Davis, Na Fianna and Setanta their group.

In the Cork competitions, reigning hurling champions Imokilly are bidding for the four-in-a-row.

Both Cork hurling and football championships have also retained their group stages with three groups of four, providing a minimum of three games; the top two in each group will advance to the play-offs where they will be joined by the winners of the colleges and divisional section. One of the three group winners will progress straight to a senior semi-final while the other six teams will play three quarter-finals.

In the draw for the 2020 Kerry football championship, champions East Kerry will face Feale Rangers in the opening round, set for August 22nd/23rd. This competition will run on a straight knockout basis, with the eight first-round winners advancing to the quarter-finals. Those first-round games will take place on August 22nd/23rd.

The Legion will also face against Kerins O’Rahilly’s, with last year’s beaten finalists Dr Crokes drawn against Austin Stacks. Kerry aims to play its football final on the weekend of September 26th/27th, with the hurling final on the previous weekend, September 19th/20th.

Here is your handy guide to sport on television this week 17:01
Trezeguet double against Palace boosts Aston Villa’s survival hopes 16:48
Lewis Hamilton puts in dominating drive to claim Styrian Grand Prix 17:43
‘Jack used to call me his official grasshopper keeper. We had a great time’ 16:26
Leeds march on thanks to late Pablo Hernandez winner 15:50