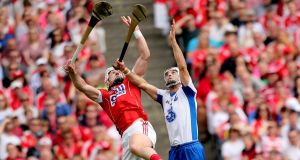 One of my reservations about Waterford was the reliance on veterans Brick Walsh and Kevin Moran for scores. By half-time they had another 1-3 between them! But again, when they really needed them Walsh was outstanding, using all his experience to get a goal after four minutes and generally create mayhem for Mark Coleman, who after a great season to date just didn’t have the strength or know-how to deal with him.

Moran totally reversed the outcome of the Munster semi-final when Bill Cooper at one stage knocked him back but the shoe was totally on the other foot here. He lorded it at midfield along with Jamie Barron who typified the contrast in energy between the teams on a day when all day the key battles were won by Waterford.

The early goal settled them whereas Cork always looked unsettled, both young and old. Luke Meade couldn’t get into it any more than Coleman. Shane Kingston was the only one of the younger brigade to get close to his form. As a whole, the team’s touch was unsure from the start.

Waterford also dealt with the Tadhg de Búrca situation very well. Darragh Fives slotted in and played the role superbly, even getting a score. That was one of the differences; not only did they do their defensive work but when Fives and Conor Gleeson got the chance they took scores nicely and calmly.

Philip Mahony was another to play effectively all day, managing to slip a couple of hand passes out the side door.

Cork looked leggy and were under pressure from the word go and had conceded a goal by the fourth minute. Shane Bennett beat Mark Ellis and Damien Cahalane to the ball and when he played it over Brick Walsh was on his own and Coleman nowhere to be seen. The cracks were there already.

Waterford always looked more comfortable in the Croke Park setting of an All-Ireland semi-final. But for Waterford’s nine wides in the first half, Cork might have been in trouble a lot earlier.

After Damien Cahalane was sent off – and he couldn’t really have any complaints about it – Cork seemed to react with some urgency. Darragh Fitzgibbon came into it at midfield for a while but even here on one run up the Cusack side, it was Shane Bennett who tracked back and dispossessed him and gave a good ball afterwards.

Fitzgibbon was uncatchable in the Munster championship. The energy was all on one side.

When the goals came in the second half there was no way back for Cork. It was bang, bang – you’re dead.

I would wonder though for the second goal why Christopher Joyce didn’t take the simple option of going back to Anthony Nash with the ball and not leaving himself open to a great bit of dispossession by Austin Gleeson, who had been quiet in the first half but came into it with a vengeance and led the Cork defence a merry dance for the third goal – a good finish – with Brick Walsh riding shotgun for him on the outside.

There was no way back for Cork after that. Five points behind and a man down, they never looked like scoring a goal apart from a snap chance for Lehane at the end which Stephen O’Keeffe saved well.

Their only strategy seemed to be to drive the ball cluelessly in on top of Fives who mopped it up all day.

Derek McGrath deserves great praise for his role in this achievement. He was doubted after their league exit in Salthill against Galway but compared to last year when they had a league final and replay they have looked an awful lot fresher in the past few weeks.

The suggestion that he was planning a different approach for this year with a view to peaking later in the season was treated with scepticism. You have to give him huge credit for that. He recalibrated their year after the lessons of the past two years and he’s now in an All-Ireland final.

All the issues from the Munster semi-final were resolved: Conor Gleeson on Conor Lehane and Noel Connors switched onto Alan Cadogan. The form of Lehane has really reflected the form of Cork all season. Gleeson worried him to the extent that Lehane became jumpy and started shooting from the sideline.

He also obviously managed the de Búrca situation very effectively. The changes minimised the loss and the team performance didn’t suffer in the absence of such an important player.

Unfortunately for McGrath he may have to reuse those strategies as the lead-up to the final is likely to feature more suspension controversies.

On the positive side they’re going in against Galway rather than Tipperary or Kilkenny and won’t have the same apprehensions. They’ve never lost to Galway in the championship.

It’s been a fantastic year for hurling. We’ve seen the re-emergence of Cork and Wexford and brilliant games like Waterford-Kilkenny, ending in a historic victory. Galway have come through and we’re set fair for a great three weeks for hurling. It’ll be no easier to call than the semi-finals and Waterford are an improving force.

I questioned their scoring capacity and they popped up and scored 4-19 and also hit plenty of wides so they showed they were well capable of competing at the very top of what has been a high-scoring championship.

1 Monica Seles: The warrior queen who could have been the best ever
2 Thrillingly fluent, thrillingly pointless: Man City’s riposte comes too late
3 Whole New Ball Game: Rugby players could test public support over pay cuts
4 The Best of Times: Ireland’s Golden Generation make Grand Slam history in 2009
5 Martina Navratilova: A leader in her time, and for ours
Real news has value SUBSCRIBE