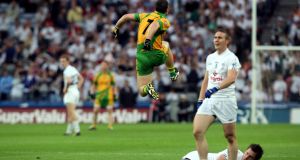 It’s not always the earth-shattering moments or the big stuff that stays lit in your mind. One of the inevitable thrills of watching sport is that every so often, something happens in the game or the race or the fight that unexpectedly transports you.

It often seems to happen out of the blue and then the game, the moment, becomes like an act of voodoo: it takes people out of themselves and leaves them enchanted - possessed by a spirit - for an hour or two.

Over the past decade, the summer dusk duels between Roger Federer and Rafael Nadal at Wimbledon, with the shadows lengthening, everyone parched, nerves shattered and the sense that all of London had been reduced to the thwock of the tennis ball across the fabled court, Nadal on the point of spontaneous combustion while Federer still looking like he’d jumped out of a Hermes catalogue; all of that stuff held the power of enchantment for a worldwide audience.

There are many examples of great, big scale eruptions of near magic - Jordan’s shot, Liverpool-Barca just last year, the best of Kilkenny v Tipp, Canning’s point, Tiger Woods’ second coming, Bird’s steal against Detroit in the now-razed Boston Garden, Norman/Faldo in Augusta, everyone has their own. But an evening that keeps returning to my mind as irretrievable and unique featured Kildare and Donegal in the little-heralded All-Ireland quarter-final of 2011.

It was a low-fi occasion in every way: a Saturday evening game in Croke Park. 39,612 turned up not sure what to expect and just glad of the relative novelty of a game in the big theatre. When it’s half full on a balmy summer night, Croke Park can be a strange place. It’s as if you find yourself there while the rest of the country is attending a massive party elsewhere. There’s a kind of furtiveness about the place, as though everyone has forgotten the game but you. The occasion becomes your little secret.

Both Kildare and Donegal were trying to discover who they were that year - as counties as well as teams. Donegal had won a first Ulster championship in 19 years a few weeks earlier under Jim McGuinness. In 2010, Kieran McGeeney had taken Kildare to within a kick of a ball of an All-Ireland final. But both counties were resolutely outside of fashion that summer. Nobody, outside of their support, cared a hoot about them. And precisely nobody was expecting the game to become what it did.

It was not and is not a ‘classic’ in the accepted sense of the term. Instead, it became something much more precious. It was a sprawling, unpredictable, messy street opera, lasting 101 minutes which deepened from an austere and frankly grim opening period into something heavenly. Both sides had absolute reason to believe they could beat the other. And both were desperate to get to an All-Ireland semi-final.

Instead of being weighed down by that knowledge, the footballers on both teams became liberated by it. They rose to the occasion. Then they blasted it out of the sky. Kildare led by 0-6 to 0-3 at the half and it was still just seven apiece with 55 minutes gone when Christy Toye, enigmatic to the last, was sent into the game and scored an electrifying goal 20 seconds later. It was, laughably, Toye’s first competitive touch in over a year: he wasn’t sure if he would ever play again after spending a year battling facial neuralgia.

There is always symmetry in sport and always ghosts. Because years earlier, Toye had scored another goal in Croke Park, against a famous, teak tough Armagh team who gave up goals about as willingly as North Korea’s regime gives out amnesties. That was in the All-Ireland semi-final of 2003; Brian McEniff’s encore as a manager. By the time the ball had been worked to Toye that day, several Donegal men lay strewn across the field. It was like a scene from Platoon.

That Christmas, Toye was asked what went through his mind when he got the ball and decided to go for it. “I thought: I might never be up here again” he said. Now here he was, eight years on, up here again, with Kieran McGeeney, Armagh’s captain that afternoon, watching from the side line. That goal changed the tenor and pitch of the evening. The remaining minutes were played at a heightened level. The crowd became aware that something special was happening. The stadium seemed to shrink and every single ball and play acquired a heavy significance.

Kildare surged back, winning three frees to force extra time. A point by Emmet Bolton put Kildare 0-14 to 1-9 ahead after 82 minutes. They were on the cusp. The field had become crowded with standout performers - Daryl Flynn, Michael Foley for the Lilywhites, Neil McGee and Anthony Thompson for the Ulster men.

It didn’t feel like a Gaelic football match at all anymore. Instead, it had the timeless feel of a baseball game: that it might go on forever and the hypnotic back-and forth sway of one of those big summer tennis games. And the floodlights had come on. There was something crucial about this. The quality of the light doesn’t show up on the television recordings of the game: it was that rich Irish summer dusk as a backdrop to the floodlights so for those last few minutes, for the crowd, what was happening on the pitch looked luminous.

What the television does capture are, of course, the faces. See it a decade on. People are mesmerised, lost in it. So are the commentators: you can hear the giddiness in Kevin McStay’s voice as the game twists one way and another: at one stage, he just laughs out loud in pure happiness.

Donegal trailed going into the closing minute of extra-time before Toye nailed a leveling score and ambled away looking bored. What is remembered, of course, is Kevin Cassidy’s cleanly thumped point which won the game for Donegal with the last kick of the match. And it was a majestic and deathlessly brave shot. What stays in the mind, also, is the prelude: Michael Murphy sprinting to collect a low ball out near the sideline, skidding to keep it in play, somehow maintaining his balance and then neatly stepping through two Kildare men before playing the ball to Cassidy.

None of Murphy’s long range thumped points or high-fielding explain him as well as the dexterousness of that play.

And such fine margins! Had that ball gone dead, who knows? Maybe Kildare win. Maybe Donegal-Dublin, that notorious semi-final, never happens. And maybe then 2012 bypasses Donegal. And, of course, later that autumn there would be a spectacular fall-out between McGuinness and Cassidy and all the attendant controversy. None of them knew of what lay ahead that evening. When the whistle went, Karl Lacy had to be held steady as he sucked in oxygen. It was the most visual demonstration of a player out of his feet you could ever see.

A few weeks later, when asked about that game, McGuinness said: “People are very rarely ‘alive.’ And for those 20 minutes in extra time what was going on in my mind was: ‘this is unbelievable. These boys are in the thick of this now.’”

What it really comes down to is atmosphere. I’ve been lucky enough to experience that in several other settings - at Wimbledon, funnily, a year later when Federer and Juan-Martin Potro took everyone through a 19-17 final set (which lasted two hours and 43 minutes) in the semi-final of the London Olympics; in Fenway Park the night play was halted because Cal Ripken had broken the streak for most consecutive games played; in Sydney when Sonia O’Sullivan dashed to that redemptive silver medal and at a few Olympics where Michael Phelps was less an athlete than alien.

But those occasions were so elevated that you almost expected something unearthly to happen. The beauty of Donegal-Kildare was that nothing was expected. This was a summer of recession, too. I went back to Donegal that evening: it was one of those July evenings in the northwest that never gets fully dark and all of the pubs around Bundoran and Ballyshannon had their doors open late. The guards turned a blind eye. The mood was good.

After three years of depressing economic news, this was escapism. You could sense this energy, this excitement, caused by one game that contained the rare magic. There’s a great line in a mediocre film, Sleepers: “It was our special night. And we held onto it for as long as we could.”