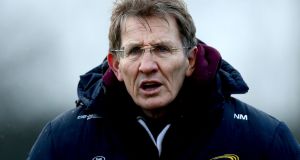 Niall Moyna: “In the last 15 years I’ve yet to walk away from a championship game saying, ‘that team lost because they weren’t fit enough’?”. Photograph: James Crombie/Inpho

Niall Moyna believes intercounty players should be able to maintain their essential fitness levels with two hours of training a week during the coronavirus-enforced closure of the Gaelic games season but he also cautions that they may reach a stage at which it’s the last thing on their minds.

Professor of Dublin City University’s School of Health and Human Performance, Moyna is also a member of the university’s Centre for Preventive Medicine and someone with a lengthy coaching and training CV in the GAA – from taking DCU to Sigerson success to working in Pat Gilroy’s backroom when Dublin won the 2011 All-Ireland.

“I’d preface anything on the topic,” he said, “by saying that if I was a Gaelic football player, that certainly would not be my priority at the moment. If they want to, they can maintain 80 per cent of their fitness doing a separate programme.

“What they will lose is match fitness. You can’t replicate that going for your daily run – even daily shuttle runs or high-speed running; it doesn’t replicate what happens in a game.

“They lose match fitness and game sense but that comes back so quickly. The vast majority of our players now have been accumulating their fitness over a number of years and there probably is muscle memory, a sustained period of hard training in the body and physiological systems.

“I’ve said for a long time that I think we maybe train a little too hard. We all should be exercising every day but for a footballer, in addition to their daily physical activity, three 40-minute sessions of quality work a week – half of that with a ball – would be enough to maintain most of their fitness.”

Whereas the current public health crisis does offer some respite from the demands on inter-county players, Moyna says that maintaining high fitness levels may not rank as highly a concern, as the pandemic progresses.

“It’s important that every citizen – player or not – gets out there and does their daily activity for both physical and mental health, which is particularly important. The truth is that many players are going to be personally impacted in the next three to four months and their priorities are probably going to change a little.”

Jarlath Burns, runner-up in the recent GAA presidential election, included one resonant statistic in his manifesto when setting out concerns that he expected to address if elected: “If I had to nominate one issue that I will feel a failure for not resolving, it’s changing the culture around the inter-county game. Niall Moyna says that teams could train 40 per cent less without affecting the quality of the games.”

“I stand over that,” he said. “I think we have fallen into this training culture and part of that is because of the nature of our fixtures. You don’t see a lot of training once the national league starts but three months before, it’s hell-for-leather and then a long, championship season.

“Then you’ve clubs with the same nonsense, this protracted, prolonged training. Once you get to a certain level of fitness and most club players get to much the same level as inter-county – maybe five per cent of a difference.

“Is it worth all the effort for that because in the last 15 years I’ve yet to walk away from a championship game saying, ‘that team lost because they weren’t fit enough’?”

He has long been an advocate of a reduction in the intensity of training, arguing that the emphasis on physical strength and conditioning work is both unnecessary and distracts from more constructive use of time in skills development.

“It’s been ingrained into our culture that if we train more often we’re naturally going to be better. That’s not smart and I’ve often quoted Dublin, who probably did less than most teams but trained far smarter in the last five to six years.

“I think there’s too much strength work at the expense of skills. If most teams registered a 10 per cent improvement in their conversion rates they’d win 90 per cent of their games. The average is around 60 per cent.

“You can do all the weight training you want in a gym but it’s not specific enough to train the muscles that you use to kick the ball left- and right-foot over the bar. The only way to recruit those muscles in a specific way is to go out and in an average week kick 300 balls over the bar.”