Mickey Graham calls for some clarity from GAA on championship plans 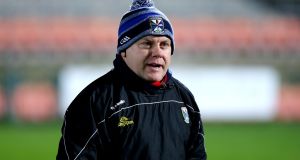 Mickey Graham: “If they were to give us all proposed schedules, based on potential fixtures and structures in the event of starting in June, July or August, that’s something tangible we could work off.” Photograph: Philip McGowan/Inpho

Cavan manager Mickey Graham has called for clarity and for the GAA to make its contingency plans for the championship public.

The Breffni boss said frustrated players are currently “guessing” and “presuming” and listening to hearsay about whether the summer games will or won’t go ahead.

Graham said he appreciates that nobody knows what the future holds but called on GAA authorities to at least reveal what back-up plans are in place.

GAA director general Tom Ryan confirmed last week that the association has drawn up “permutations and plans” for what the schedule might look like in the event of various start times between May and August.

“At this moment in time, players, managers, everybody really is looking for a wee bit of leadership from Croke Park, ” said Graham, whose side were pushing hard for a return to Division One of the Allianz League before play was halted.

“Look, I totally appreciate that nobody can predict the future. I don’t expect the GAA to be able to do that. But in the absence of any information at all, what you get then is one fella saying, ‘Forget about the championship, it’s not happening’ and another fella saying, ‘I think it’ll go ahead’.

“I’m obviously in contact with my players a good bit and the first question they all ask me is, ‘Did you hear anything about the championship?’ I know it’s tough for the GAA, they’re playing it week by week and looking at the national situation. But if they were to give us all proposed schedules, based on potential fixtures and structures in the event of starting in June, July or August, that’s something tangible we could work off then, that we could be working towards.

“Then when we get to the middle of June, for instance, and there’s nothing happening, well we can start looking to the next plan and so on.”

Graham feels the situation regarding the Allianz League is more straightforward and that officials should just make a firm call now. There are two games remaining in the football competition, aside from the divisional finals.

Cavan are in third place in Division Two on six points, one behind joint leaders Armagh and Roscommon, with outstanding ties against Kildare and Roscommon to be completed.

The plan was to use finishing league positions to determine eligibility for the new Tailteann Cup though it’s looking like a condensed championship may have to forsake elements like the Tier 2 competition, qualifiers and Super 8s.

“I think it’s an easy call. We’re getting up towards May now, we’re talking about not having enough time to play the championship, why don’t they make the call on the league at least and show that they’re taking leadership and making calls. Nobody knows what’s going on.

“Personally, I’d imagine they’ll just pull the Tier 2 and leave the leagues. Why would you finish the leagues if the Tier 2 isn’t going to go ahead? It’s unnecessary. When teams do come back they’re going to need four weeks of training so that’s another month gone.

“I personally think at this stage the GAA should just make a call. They have enough people in contact with the Government to have some sort of long-term plan as regards what the Government are planning. So turn around and let managers and players know that, ‘Okay, here is Plan A, here is Plan B and so on’.

“They need to start giving that feedback, no more than businesses need to give feedback to employees. People are just guessing at the moment, they’re just presuming.”