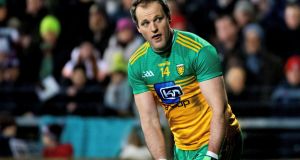 Donegal’s Michael Murphy turns 31 in August and says he’s keen to play as much as he can. Photo: Evan Logan/Inpho

Hope and reason may not yet entirely rhyme but Michael Murphy is holding onto both when it comes to the prospect of playing some championship football in 2020. The only thing that continues to be certain for now in the face of Covid-19 is the uncertainty.

The Donegal captain and 2012 All-Ireland winner believes the GAA are also right to hold on to that prospect for as long as possible, Croke Park agreeing this week that while there will be no intercounty activity before October at the earliest, the staging of any matches behind closed doors was unlikely at any stage.

“Initially you’d be a wee bit down-hearted by that,” Murphy says of the latest GAA guidelines. “But as the time has passed over the last 24 hours, the more as a player you are warming to the fact that there is a definite minimum time.

“You are not worried that it is going to be sprung on you in the way anything can be sprung on you in four or five weeks’ time. It gives a little bit more of a blanket in that regard. Speaking to a good few of the players over the last 24 hours I think that’s where their heads are at too. Having to deal with that uncertainty or ambiguity is just part of life now at the minute. It is probably a little bit trickier than normal given the structured nature of the GAA season.”

Any shape or form

What is certain as far as Murphy is concerned is that he would take championship football in any shape or form should it come back before the end of the year. Just how soon he dares not even guess: “I honestly don’t know. I’m playing what, 14 or 15 seasons but I’m not a medical expert on the thing. I’m tuning into the six o clock news most nights and you are hearing different things all the time, so it’s not for me to come out and say that I’m confident or not.

“I’ll tell you one thing, I’m hopeful there is. I want there to be, for myself I’m pushing on in years, I want to play football, I want to get back out on the pitch again. It’s what you do it is your passion, it’s your hobby, it’s everything. I love championship football and I’m hopeful there will be in 2020 but can I predict that or am I confident? I can’t control that.

“You’re looking over at Germany at the moment, sport is getting back up and running there, and that might just be a very easy comparison to make, but that’s what I’m hopefully looking for, football this year, and again it’s everyone’s personal view, but I’m still hopeful for football this year.”

Murphy turns 31 in August, having made his senior debut as a teenager with Donegal back in 2007, and truth is he can probably count on one hand the number of seasons left in his career.

“I’m also doing an online college course, getting me up in the morning, from 8-12, at least getting something done. The garden is getting looked at too. I know it will definitely come back at some stage but hopefully in the near future. But to say you are disappointed in people or that you’re angry would be the wrong way to put it, it’s just the way it is at the moment.

The biggest concern, it appears, is exactly social distancing will come into effect in a contact game like Gaelic football: “How long do you stay in a tackle? Is it a split second or can you roll around for a couple of seconds? I think potentially we can learn from the sports that are going to start up now. In terms of Germany and the German league, I think will everyone will take some learning from that, when it does start up, as to what way they go about it and the resources they throw at it. Is that sustainable for the GAA to do, for counties, clubs and underage teams to do?

“I just want football back. If it’s done through Ulster, well and good. If it’s done through a 32-county open draw, bring it on too. If we get the word in the morning that it’s one of them I’d gladly snatch it with both hands, if it can be done in a safe as possible way for everybody, the public, the players, supporters. I would grab it with both hands whatever way it is done.”

Murphy was speaking at the launch of R.E.S.T, a new mental fitness campaign developed by the GPA and WGPA in partnership with the mental health charity, Pieta, with a reminder of the importance of Routine, Exercise, Sleep and Talk during the pandemic. To find out more about Pieta’s Darkness Into Light Sunrise Appeal see www.darknessintolight.ie