Masks at the ready as GAA emerges from its great slumber 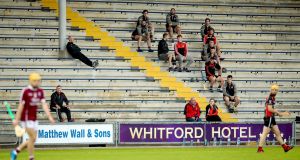 A view of people in the stand during the Wexford Senior Club Hurling Championship match between St Martins and Oulart The Ballagh. Photo: Tommy Dickson/Inpho

By his own admission Liam Spratt may have been in danger of seizing up during the enforced longest break of his broadcasting career. The South East Radio match commentator was getting ready on Friday to bring the first of the Wexford championship matches to the county’s radio audience.

“I told the lads on the radio they’ll have to get out the three-in-one to make sure I’m lubricated,” he told The Irish Times a couple of hours before throw-in.

Sporting a Wexford snood, freshly acquired, he nodded to the Covid crisis which has re-shaped the GAA season.

“As a fella says down here, a yoke that we can’t see is after getting us. I wouldn’t mind if it was something we could see.”

He accepted that national television coverage might affect those tuning in, as TG4 was also breaking its four-month abstinence so the meeting of county champions St Martin’s and Oulart-The Ballagh also had a national audience on Friday, as the much-delayed season got underway.

It had been a wearing week for the Wexford GAA. Having lobbied Government to allow bigger crowds at their matches, not alone did they receive no favourable response but by Wednesday evening the expected progression from a limit of 200 to 500, in keeping with Phase 4 of the exit from lockdown, had been put on pause.

There were as a result just 200 in Chadwicks Wexford Park. Television pictures didn’t suggest a lot of social distancing but maybe the clusters were family members or from the same household.

Others were taking it all seriously. Cameramen were suitably masked up on the sideline as they captured what was happening.

The anthem was delivered by Mick D’Arcy of local band Cornerboy. “He wouldn’t have had much work recently,” observed Spratt of the pandemic-enforced drought of opportunity for musicians.

Wexford has become a happening spot with well-known former county managers taking up commissions in the county. John Meyler, who this time last year had just seen his Cork team exit the championship has returned to his own county to Piercestown – less than 10 miles from Tacumshane where he grew up – to take up the reins of county champions St Martin’s just as he had managed Wexford.

Derek McGrath who led Waterford to an All-Ireland final three years ago is getting ready to direct Faythe Harriers on Saturday.

On Friday Meyler was up against another former Wexford manager in Liam Dunne, who is rebuilding with his home club Oulart-The Ballagh and the side features some familiar names. The manager’s son Billy ends up as Oulart’s top marksman whereas two of their goal scorers were Tommy and Martin Óg Storey, nephew and son respectively of All-Ireland-winning captain Martin.

The weight of punditry favoured a comfortable win for the champions but it started badly for Martin’s with the experienced Daithi Watters going off injured in the early minutes and the defence looking in need of the three-in-one oil turning over ball for scores including the opening goal by Tommy Storey.

Martin’s gradually got back into it, their mobility starting to stretch Oulart.

The structure of the championship with three-team groups meant that the losers would end up if not beyond rescue, at least in need of it but having faced a lively wind in the first half and caught the challengers by the break, the champions weren’t going to be the ones in need.

Given all the clamour for tickets – only about half the permitted crowd were actually supporters – it was hardly surprising that some sought innovative ways around it all.

“There’s someone from outside looking in through the gate to see bits of the game,” said one of the co-commentators.

Wexford senior Jack O’Connor ended up Man of the Match with 2-8, including two immaculately struck penalties but there was competition with Jake Firman managing a hat-trick in a comfortable 5-19 to 3-16 win and Michael Coleman providing assists for nearly all the goals.

Another county player Shaun Murphy got a straight red card in the second half to undermine further any hopes of an Oulart comeback but they battled away.

Earlier in the day on South East’s Morning Mix, county secretary Gearóid Devitt had explained the quandary they were in with tickets but not everyone was impressed, according to presenter Alan Corcoran.

“John has sent in a comment and I’ll let you refer to it because the guidelines set down are being set down by the Government and not by you [uh, oh]. He says he’s ‘a long-time follower of the GAA and a member of my club but now I’m being told I can’t go to hurling matches over the weekend when there is plenty of space in Wexford Park. I’ll remember this when they come knocking, looking for tickets et cetera.”

No wonder Micheál Martin, county vice chair, amidst the pressures of the week, commented: “There is nothing as stressful as having to allocate tickets.”