Managers may end up winning and losing at Congress 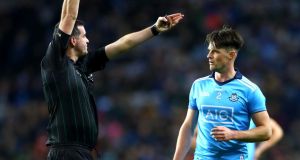 GAA managers may find themselves winning and losing some power on the sideline depending on the outcome of two motions set to go before Congress in Croke Park later this month.

There are 63 motions in all at the Congress set for February 28th-29th, dealing mostly with rule amendments or governance, Congress 2020 also allowing for rule submissions to come from counties: with that Limerick’s submission (motion 2) will allow for team managers or team captains to clarify a referee decision “limited to two failed requests per team per game”.

This would amend Rule 1.1 to read: “that the referee shall, during the course of the game, also have power to consult the Hawk-Eye score detection system and/or match official on his own volition or following a request from either of the two competing managers or team captains to clarify if any of the team of officials erred in making a decision in relation to the validity of a score or the awarding of a free/sideline ball/ wide/ 45 or 65 or a square infringement. This to be limited to two failed requests per team per game. Where a request is deemed successful a team retains its right to make a further request. All such requests from managers or team captains must be with the referee (captain) sideline official (manager) before the play resumes.”

Motion 3, which comes from the standing committee on playing rules, would rule out the manager being able to send anyone on to the field, namely the maor foirne or water boy, if Rule 1.4 is amended to read: “A team official shall not enter the field of play. Exception: the referee may give his permission to a team medical officer or one authorised official to enter the field of play to examine an injured player.”

As expected, the standing committee on playing rules has also submitted a motion (13) to introduce the back card for hurling, similar to football, for category II infractions; “To deliberately pull down an opponent; to deliberately trip an opponent with hand(s), arm, leg, foot or hurley; to deliberately collide with an opponent after the opponent has played the ball away or for the purpose of taking the opponent out of the movement of play; to remonstrate in an aggressive manner with a match official.”

Dublin hurler and former captain Chris Crummy has questioned both the need for a black card in hurling and also highlighted some problems which may arise if no team official or water boy is allowed enter the field.

“Personally I wouldn’t be a fan of the black card,” he said. “I think the game is in a very good place, some of the matches over the last few years have been some of the best matches that have taken place over the last few decades. I don’t think there is a need for change, as a player, and from chatting to team mates I don’t think there is a strong voice for change. If anything it might just bring other issues that aren’t in the game at the moment.

On not allowing a team official to enter the field of play, Crummy said: “I don’t think that will work, matches are so intense, as a defender anyway you’re not going to leave your man for a split second to go over to the sideline to get some water. Those water carriers are needed in the heat of the summer, unless they’re going to have a water break, or something like that.”

Motion 6 calls for a rule amendment whereby a player in receipt of a kick-out cannot pass the ball directly back to his goalkeeper, motion 4 seeks to amend the football rule from the number of steps a player is allowed to carry the ball to “a maximum of two seconds”, while motion 9 calls for “two points are scored when the ball is struck directly over the crossbar and between the posts from a sideline puck”.

Motion 16 will limit the number of players who can approach the referee in any circumstance: “Before commencing play a maximum of two players from each team shall present themselves to the referee, these two players having already being selected by their team officials and wearing distinctive armbands.”

Motions 33-44 deal inclusively with the 30 recommendations published last year by the fixtures calendar review task force, and begin with motion 34 allowing for the establishment of a national club fixtures oversight committee that will have the responsibility for approving county club fixtures on an annual basis.