London GAA in limbo ahead of intercounty return 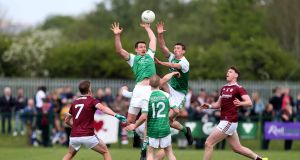 London and Galway in action at Ruislip in the 2019 Connnacht Championship. Photograph: Gerry McManus/Inpho

London football manager Michael Maher has admitted the Exiles remain in “limbo” regarding their scheduled return to intercounty action later this year.

Club players in the 26 counties resumed contact training and challenge games on Monday but players in London are restricted to non-contact activity in groups of five.

Maher suggested September as a possible start date for the local club championship and is ‘absolutely adamant that no club player will be taken from his club until their club season is finished’.

That could mean players returning to the county setup just days before their scheduled October 17th/18th Allianz League Division 4 clash with Waterford.

London are scheduled to play Carlow in Round 7 a week later though Carlow chairman Sean Campion is quoted in the Carlow Nationalist stating that ‘the London game will definitely not be going ahead’.

We’re just in limbo. I don’t know if we’ll be back to contact training any time soon

Maher described it as a hugely frustrating situation and admitted that potentially facing Connacht title holders Roscommon with little or no preparation beforehand would be an ‘impossible task’.

“From my point of view, we’ve always wanted to take part and wanted to be included in the fixtures but I really don’t know where it’s going to go at this moment in time,” said Maher, the first London born manager to guide the Exiles.

“We’re just in limbo. I don’t know if we’ll be back to contact training any time soon, I don’t know about travel restrictions, it’s just a really tricky one.

“The situation is that our name is in there, we’re part of the competitions and we want to be there, but whether we’ll be in a position to take part is out of our hands.”

The tightening of restrictions in Leicester following a spike in Covid-19 cases has heightened fears throughout the UK of a return to full lockdown measures.

Maher said his players have remained positive and he doesn’t expect any to quit the panel even if the Carlow game is cancelled, leaving just guaranteed games against Waterford and then Roscommon on October 31th/November 1st.

“The rumour is that the Roscommon game is going to be in Ireland and not Ruislip,” said Maher. “That’s the word and if we didn’t have any League games beforehand it would be a very, very difficult job. We’re already lacking the ability to play challenge games and if we had to go over to Connacht to play Roscommon with very little time together before, I wouldn’t call it a farce but I’d probably call it an impossible task.”

Maher is aware of the controversy around various intercounty teams returning to training here despite not being permitted to do so until September 14th.

“Intercounty teams and managers are getting a hell of a lot of flak but we’ve done everything by the book, I’m absolutely adamant that no club player will be taken from his club until their club season is finished,” he said.

“We have no dates at all yet for when the clubs will start in London, the nearest thing we can gauge it off is that non-league soccer teams are looking at a September start.

“If our clubs aren’t back until September then that’s obviously a very short window that they’ll have with the county squad before games start but so be it, I want to make sure the clubs get that priority.

“Another question is if clubs couldn’t start until later on again in the year, would we be in a position to play county games? Look, we don’t have any answers to those questions at the moment.”

New York, who were initially due to play Galway, haven’t been included in the redrawn Championship with GAA President John Horan explaining this is due to “the travel restrictions and risk”.

1 Ken Early: PSG would be sensible final move for Ronaldo
2 A new breed of superstar - Collin Morikawa wins US PGA
3 The Offload: Joe Schmidt the influencer is due a second act
4 Ronnie O’Sullivan: snooker’s next generation are ‘so bad’
5 All in the Game: Bohemians forced into awkward apology
Real news has value SUBSCRIBE