Games can be covered with just a single camera and operator 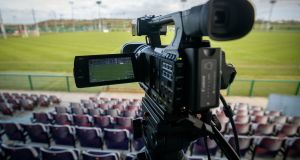 A camera set up to live stream a game. Photograph: Oisín Keniry/Inpho

Zoom meetings aren’t the only application of technology to have benefited from the strange circumstances of the last five months. The Covid-19-enforced restrictions on attendance at live events have pushed streaming centre-stage, as an obvious vehicle for bringing matches to those unable to secure scarce tickets.

The decision by Croke Park to permit streaming even in opposition to live television broadcasts by established rights holders has seen a rapid spread of counties avail of the process.

In Cork the Examiner newspaper has acquired the rights to stream championship matches for free in agreement with the county board.

It has been part of the GAA landscape in a different market for six years now, since GAAGO, the global streaming service, which is operated by the GAA and RTÉ in partnership, began to build a big overseas interest and it is available in 184 countries – “some of which don’t even have a Starbucks,” as GAA commercial director Peter McKenna put it.

Closer to home the demand for streaming has come as a boon for Nemeton TV, the Ring-based production company and long-time outside broadcast partner of TG4 on its club and national league coverage.

As well as providing the television production for this weekend’s live matches – Kilmallock against former All-Ireland champions Na Piarsaigh in Limerick on Friday and two days later the Cork football clash of Castlehaven and Carbery Rangers plus the deferred coverage of the Galway hurling Sarsfields-Portumna encounter – Nemeton will be providing streaming services in all four provinces.

Around the country streaming is provided on a range of platforms but for Nemeton and others the imperative is to be able to charge viewing fees, which typically range from €5 to €10.

“The counties we’re dealing with are looking for a paid-for platform because most need revenue and have to get it somewhere. Most get their money from gate receipts but as these are nearly non-existent – my club, An Rinn had to raffle 50 tickets the other night for an intermediate match.

“So, obviously counties need the exposure so that people without tickets can see the matches but they also need the income because they have no other sources.”

Cameras with a wide lens can capture entire matches and need just one operative on location.

“This is purely functional,” says Mac Murchú, “with a single camera and a proprietary system we came up with and involves encoding the signal on location and sending it back over the 4G network to our base in Waterford where we add on the graphics and stream it out. Traditionally we would have had to send two or three people out but now we send one person out and the team in here deal with the counties.”

After the shock of spring when all live sport suddenly halted, being back at work is a massive relief.

“It’ll be a tough year,” he says. “We’ve already lost a third of it but I’m not complaining at all because at one point we were bracing ourselves for there being no live GAA for the rest of the year. We’re more than happy to be back at work and the atmosphere here in the building here is one of absolute elation.”