Littlewoods sponsorship deal means quite a lot to GAA 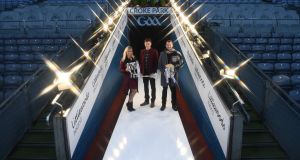 As sponsorship announcements go it was gently reminiscent of the boom times – Littlewoods essentially taking over Croke Park to launch their new three-year agreement with the GAA as one of the multi-tiered sponsors of the hurling championship and also as title sponsors of the Camogie national league.

It was all lights, cameras and action – a temporary catwalk set up in the middle of Croke Park as part of the shoot and later stuffed goody bags for everybody in the audience.

Littlewoods are clearly determined to get their money’s worth, investing in excess of €3 million in the GAA over the next three years, which is partly what the multi-tiered sponsorship model is all about.

It’s also the first foray into the Irish sporting sponsorship market for Littlewoods, whose parent company, UK’s Shop Direct Group, has roots going back to the 1920s and the Littlewood Pools retail and sports betting company.

Now operating here as Littlewoods Ireland, it’s one of the country’s leading online retailers in fashion, electrical and homeware, with an average of 2.5 million online visits each month, offering over 70,000 products from more than 1,300 brands.

“As we continually look at new ways of bringing our games to new audiences and supporters, I look forward to the support they will offer us in the promotion of the games in the months and indeed years ahead.

“And I look forward to working with them as a partner, and I do stress ‘partner’. I’ve said it at other launches, and I say it constantly, because it is important that we work together promoting values that we share.”

The GAA have been working off the multi-tiered sponsorship model since 2008, ending what until then had been “ownership” sponsors, namely Bank of Ireland in the football championship, and Guinness in hurling.

Littlewoods will replace Liberty Insurance as one of the three headline sponsors of the hurling championship, that deal signed until 2019, joining the remaining two sponsors Etihad Airways and Centra.

Currently the three headline sponsors of the football championship are AIB, Eir and Supervalu. Liberty will remain in place as sponsor of the All-Ireland camogie championship next year.

However Littlewoods are also committing a further amount to sponsor the camogie national league, also through to 2019: “This marks the first occasion that the national league has had a title sponsor,” said Camogie Association president, Catherine Neary.

“The popularity of Camogie continues to grow and it is an exciting prospect for us to be associated with Ireland’s leading online department store, a company that is synonymous with innovation, fashion and style.”

Indeed Littlewoods is best known for its fashion credentials, including its own label ‘V by Very’ which launched in September 2016.

Its first act as sponsor was to sign up two GAA-style ambassadors in Cork’s dual star Anna Geary and the newly retired nine-time All-Ireland winner Jackie Tyrrell from Kilkenny, who have already shot a promotional video in the wild surrounds of Lough Tay in Wicklow.

Geoff Scully, managing director of Littlewoods, outlined some further ventures planned as part of the arrangement.

“We feel it is an opportune time to begin a partnership with the GAA,” he said. “This is a new space for us and will allow us to engage with communities throughout the country through the hurling championship, camogie national league and also the GO Games children’s events in Croke Park which we will be sponsoring.

“We plan on bringing our love of style and innovation to this partnership and believe it is a great fit for all involved. We have experienced consistent growth in recent years as a result of placing the customer at the centre of our business.”

Since first embracing multi-tiered sponsorship in 2008 the GAA have been working off the model long since in operation by Fifa, Uefa, the IOC and most other major international sporting bodies.

Before that, the sole headline sponsor actually had “ownership” of the championship, namely Bank of Ireland in football, since 1994, and Guinness in hurling, since 1995.

Six companies now share the All-Ireland senior hurling and football championship: initially, in 2008, the football sponsors were Toyota, Ulster Bank and Vodafone, while in hurling, the first sponsors were Guinness, Etihad Airways and RTÉ. Under the new agreement they also become the broadcast sponsors of the live games, while ownership reverted back to the GAA.

Guinness continued as part of the multi-sponsor arrangement until 2013, despite wider concerns alcoholic drinks sponsorship in sport, before being replaced by Liberty Insurance.

As headline sponsors, both Super Valu and Centra are also in a position to sell match tickets. Outside of the senior championship, the GAA has also been able to attract further sponsors for their competitions including AIB, Allianz, Kellogg’s and Bord Gáis Energy, while Dublin GAA attracted another major sponsorship deal of their own with AIG.