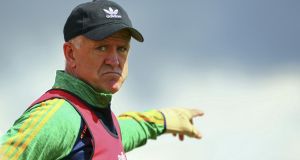 Offaly manager John Maughan has called on the GAA to ’pull the curtain down’ on this year’s championship. Photograph: Ken Sutton/Inpho

Had global history just followed its once normal course John Maughan would be thinking about little else right now beyond Offaly’s opening Leinster football tie this weekend: instead he’s listing off the reasons why the GAA should abandon the entire 2020 championship for once and for all.

Knockout or backdoor, limited capacity or behind closed doors, and Government recommendations aside, Maughan believes the risks will outweigh the benefits until such a time the playing of games can be considered properly safe, and he can’t see that happening in 2020.

“I would pull the curtain down now, yes,” he says. “I think we need some level of certainty now, because we’ve been looking down the road for the last number of weeks, looking for some kind of definitive answer, and it’s just not there.

“I can understand there is nothing definitive yet, but nonetheless, in light of what’s happening around the world, and the advice on groups of people coming together, in all likelihood we’re not going to see any intercounty activity, at any level, in 2020.”

In his second season with Offaly, and 31 years after taking up his first football assignment with Clare, Maughan is one of the most experienced managers in the game: Offaly were due to host Carlow in Tullamore on Saturday evening, one of the 10 provincial championship matches originally scheduled for what was to be the first bumper GAA weekend of the summer. Covid-19 has already taken care of that, and with the GAA’s management committee still discussing the roll-out plan unveiled by the Government last Friday, Maughan suggests they look at the bigger picture.

“We’re heading in the right direction, containing the spread reasonably well, but I certainly wouldn’t advocate a return to play for any intercounty player, and I wouldn’t like to see anyone jeopardise a family member by coming back to play football,” he says.

With that, Maughan echoes the words of Connacht GAA president Gerry McGovern, who stated: “We’ll not die for a game of football, but we could cause death by playing it.” Former GAA president Liam O’Neill also told The Irish Times last month that the 2020 championship should be shelved.

Maughan also points to the psychological health of the players: “I think he [McGovern] makes a very, very salient point. He’s absolutely right. With the hundreds of dressingroom environments that would open up, all it would take is one person, to cause either a bad case or, God forbid, a fatality, and you think about what that would mean to the GAA person, or any sporting organisation.

“Young players these days will keep themselves fit anyway, with any bit of guidance. And they are getting that. We’re offering a bit of guidance, and structure, with Offaly, but it’s not preparing them for championship football. We have to be conscious of the psychological aspect too, trying to keep them positive. Especially in an amateur game.

“I know some counties already have a potential return date in the back of their mind, thinking about maybe playing in October. We’re not doing that, because again I just can’t see it happening. We just give them a couple of sessions, for two or three days a week.

“It’s different with the professional athlete, in professional sports, but the amateur player needs to get on with things. And again I can’t see anything happening at intercounty level and I can’t see why they would chance it with clubs either. Restricting it to 30 players, with medical staff and management gathering too, would be with a risk to anyone, whether it’s a player, or any member of the staff. Suddenly you could have a very significant problem.”

After guiding Clare to an historic Munster title in 1992, Maughan’s intercounty management journey has taken him to Mayo (twice), Fermanagh, Roscommon, and now Offaly. He’s as keen as anyone to get back onto the sideline, but doesn’t think either that the 2020 and 2021 championships could be both played next year.

“One of the conversations I’ve also had around this is the fact the whole intercounty scene had gone a bit crazy, players committing to 31 hours a week in some cases, I was certainly appalled by that. If any good comes out of this, it might be a review of this, that maybe with the huge shortfall in county revenue, teams won’t need to be training as much, that it might be brought back to more reasonable levels, with a more prudent approach.

“The GAA and Croke Park have their financial motivations, of course, but they have to see the human side too, the kind of damage that might be done, and just park it all for now. And forget about trying to play two championships in 2021.

“Again, and understandably so, the GAA are thinking about contracts and sponsors, gate receipts, and what to hold onto that, but the Government has bailed out one sporting association already this year, and if they have to bail out the GAA, which they may well do, there is already precedent there.

“Please God we will get it back sometime next year, and things can return to some level of normality. Things won’t be the same again for a long while, at every level, but it’s also important to stay positive in the meantime. And once it does return, at the right time, of course it will contribute hugely to the mood of the nation, uplift everyone.

“I just can’t see that happening in 2020, so dragging it along, waiting and wondering, doesn’t do anyone any good. And I would be conscious too of the psychological health of players, right around the country. They need some certainly, and let’s hope it comes sooner rather than later.”