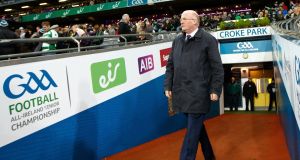 GAA President John Horan has said this year’s Championship could be carried over into 2021. Photo: James Crombie/Inpho

GAA president John Horan has said that the association is open to an inter-county Championship that carries over into 2021. Such scheduling was common in the early years of the GAA’s history up until and including events like the War of Independence and Civil War but it’s nearly a century since it was necessary.

Speaking to Seán O’Rourke on RTÉ’s Today programme in the context of the coronavirus pandemic and consequent lockdown, Horan was asked about the prospect, should it not be possible to complete this year’s championship by December.

“Yeah,” he replied, “we’re open to that if it’s a possibility. We’d just adjust the 2020 season – definitely. I think there’s a hunger and appetite out there among both players and spectators to see games so I think people would accept if we were to make that decision that it would be for the benefit of everyone involved.”

On a supplementary as to whether the entire 2020 championship could be played next year, the president was non-committal.

“Well we’re taking our guidance from the health authorities and did issue a statement that we wouldn’t be back until July and I think we can push that back farther now again but control of the virus is the key issue for all. Games are games but as I’ve said all along, we’re not going to put anybody at risk.”

He was also asked about a story from RTÉ that the Department of Sport was considering ways in which intercounty players could return to training subject to frequent monitoring in the context that planned mass coronavirus testing becomes reality.

Horan was dismissive of the idea, saying that the GAA had not brought forward such proposals.

“At no stage have we discussed the return to training of inter-county players with any Government department so I’m kind of aghast as to where this story has come from.

“One thing about the playing of the games is that they’re a contact sport. Social distancing at the moment is a high priority and I can’t see contact sport coming on board in the short term. The other feature of this is that we’re an amateur sport. I know there’s a lot of speculation that professional sports like rugby and soccer may come back, maybe in Ireland or overseas but that’s probably in the sense that they can cocoon their players.

“Our players are amateur athletes and they go back to their families and workplace and we can’t put them or anyone they come into contact with, at risk just for the sake of playing games. We won’t be making any rushed decision on this.

“We’ve always taken our guidance from the health authorities and we’ll continue to do that and until they declare that contact sport is safe we won’t be playing games. If and when we do return, the club scene will be our priority because 98 per cent of our activity happens at club level and that includes our inter-county.

“So, as we’re looking at it at the moment, our return initially will be back to club activity before we engage with inter-county.”

He also undertook that in advance of any return to inter-county activity, players would be given an opportunity to prepare.