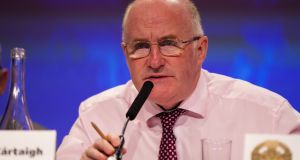 John Horan: “I would hate to think when all this is over that as an organisation we would have made a decision that cost any family a member of their family.” Photograph: Tom O’Hanlon/Inpho

Reiterating the view that games activity is extremely unlikely while social distancing is still recommended, GAA President John Horan said that the association faces a €50 million loss this year should no matches take place in 2020.

“At the moment it’s looking like we will end up with a loss of between €25 and €30 million centrally in Croke Park – the central GAA and the actual stadium – and throughout the organisation taking into account county boards and clubs the loss for the year if we get no games played is probably heading in the region of €50 million.”

Speaking to Des Cahill on RTÉ’s Sunday Game on Sunday, he also underlined the cautious approach, as laid out in last week’s response to Government plans to ease the Covid-19 lockdown restrictions and also appeared to rule out any matches being played behind closed doors.

“I’ve an issue with this ‘closed doors’ concept because if it’s safe enough for the players to be in close contact on the pitch then it’s going to be safe enough to have a gathering in the actual ground itself.

“The key thing is contact sport,” he said. “Our concern has to be the players on the pitch, their families and work colleagues. They are all amateurs and it is a hobby to them all – and I know they take it very seriously at inter-county level and have a professional approach to it but we cannot risk anybody’s health. I would hate to think when all this is over that as an organisation we would have made a decision that cost any family a member of their family.”

He appeared to waver a little when asked was he ruling out enhanced testing as a mechanism for reintroducing matches for players at county as well as club level although he pointed out that such a regime would be “extremely expensive”.

“Well, I’m not ruling that out. That’s something that will be discussed among our advisory group but certainly it’s not something we could do as a blanket across the whole organisation.”

There’s little to indicate however that the advisory group set up to guide any return to play, which includes a number of doctors, would advocate the approach.

Horan appeared to rule out any completion of the 2020 leagues, saying: “At this stage I’d be inclined to say that we’ll struggle to finish them.”

He also accepted that if there was no return to play by October, as targeted, that the inter-county year would be effectively over.

The president had recently floated the idea of playing this year’s championship in 2021 but on Sunday he qualified that position, saying the championship, “… would have to start in 2020 and then maybe January, February [of next year].”

He reiterated a couple of positions that the GAA had already made clear: that the club game would have priority in any return to play and that there would be no inter-county championship without the presence of the cross-border Ulster counties, which are subject to a different jurisdiction.

“We’re not going to make any decision that leaves the Six Counties behind. We’re in this together.”

He clarified that players are currently covered by GAA insurance policies for Covid-19 but warned that this would likely change when the policies elapse.

“Under our present policy our players would be covered for Covid – provided we don’t do anything unsafe and that’s part of our decision making process in not resuming games. Going forward I think insurance companies probably will exclude pandemics but as it stands until 31st October if our players are involved in playing or training they would be covered.

Asked was there anything positive that could be taken from the current crisis, Horan suggested that the use of digital platforms for training might alleviate the burden on county players, estimated by the 2018 ESRI report at 31 hours a week, and on county board coffers.

“It’s something ourselves, the GPA and county managers could maybe be brought into a room and discuss,” he said.