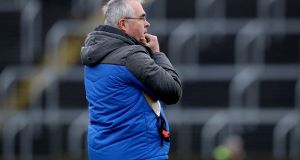 Luke Dempsey: ed St Joseph’s Secondary School, Rochfortbridge to their first Leinster senior ‘A’ final this year. “I think it’s good to give people hope and that’s what we’ve been given by the Leinster Council.” Photograph: Inpho

For the senior footballers of St Joseph’s Secondary School in Rochfortbridge the two biggest things in their young lives right now are shrouded in uncertainty.

Earlier this month the Covid-19 outbreak led to the Government postponing the Leaving Certificate to late July or early August - and only last week a July 29th date was provisionally set.

Meanwhile the Westmeath school are into their first ever Leinster senior ‘A’ final, an historic achievement that has “pricked the ears of the entire county with bunting and flags everywhere” according to year head and team coach Luke Dempsey.

That final was to be played on March 14th, a day before the closure of all schools in the country, and it has not yet been rescheduled. At the same time the Government put a stop to all sport, since extending those restrictions until at least May 5th. They are almost certain to be extended further.

“We are delighted that there’s not an X put through this year’s Leinster campaign and that is thanks to the Leinster council,” explains Dempsey – a former manager of Westmeath, Longford and Carlow.

“If it goes beyond the entrance to third-level then that’s it, you’re not really going to pick a Saturday in December 2020 to get the school team back together. But who knows what’s going to happen.”

Third-level colleges are saying they will be in a position to admit Leaving Cert students in late October or early November. It all means there’s a narrow window for Rochfortbridge’s final against Naas CBS to be played in. And that’s assuming contact sports such as GAA return at all before then.

“This particular group of lads are very philosophical about the way things are and how the crisis has affected both their Leaving Cert and the Leinster final. They accept whatever is thrown in front of them and they will take this on the chin as well if it’s the case they can’t play it. Because they can see the bigger picture.

“But the way we finished up with the Leinster council was very reassuring – they talked to me and the managers of Naas, and the two schools in the ‘B’ final and all of us said we would play the games at very short notice. And that’s what we’re all hoping will happen – but that’s all down to the Government guidelines.”

Dempsey has managed the Leinster Railway Cup team, Westmeath to minor and Under-21 All-Ireland titles, as well as winning county titles with Moorefield in Kildare, and most recently Mullingar club St Loman’s. He says the schools involved are envisaging a refixture in August or September and would even be open to playing on a weekend during the Leaving Certificate.

“There’s a lot of negative commentators telling us to write off contact sports – and if they’re right they’re great at the end of the day – but I think it’s all too negative. The GAA are right to hold out until such time as it’s definite that we can’t go back in 2020. Because, in rural communities especially, it’s what everyone waits for. So I think it’s good to give people hope and that’s what we’ve been given by the Leinster Council.”

GAA games administrator Brendan Connolly told The Irish Times that “every effort” will be made to get the post-primary competitions completed, while remaining practical about it too. “It means an awful lot to the schools so we are trying to give them as best a chance as possible”.

They are witty and good-humoured lads and they are living in great hope that this will be played. And we give them that hope by staying positive

“You read these commentators writing off GAA in 2020 and I just get annoyed when I see that because we have to hold out hope that there will at least be club football,” explains Dempsey. “It could start in August say and go right through August, September, October or into November. Where county boards would come up with contingency plans. That’s the way I’d be thinking – wait until we’re all told it’s definitely off and then we’d all accept that decision.

“You have to have hope, and you should be like that for the rest of your life. I could go and say ‘yeah they should cancel it and there should be no schools football, this is an awful emergency and crisis’. But it’s too easy to say that – youngsters and everybody live for hope.

“The GAA is all about hope, I was in counties back in the day – Carlow and Longford and Westmeath and you had to have hope. When you’re in Division Four, you want to get them out of it and to pull off a massive shock in the summer. Otherwise what’s the point? I can’t stand these doomsdayers.”

“It’s our first final ever, and because underage football in Westmeath has gone particularly bad in the past couple of years, there was huge interest in this group and people would think this is a great chance to win a Leinster title and maybe it’ll follow on with a good county Under-20 team next year.”

The co-educational school takes in students from Offaly, Westmeath and Meath. This year’s talented crop includes Offaly Under-20 team captain Aaron Keelaghan (son of former county player Paschal) who scored 0-7 in their semi-final win as well. As Westmeath Under-20s Jack Torpey, Shane Fleming, Ciarán Daly, and a number of last year’s Westmeath minor team such as Devin Hill who scored a crucial goal in that semi-final victory.

They were emphatic winners over the competition’s big guns St Patrick’s of Navan and Dublin school Coláiste Eoin on their way to winning the north Leinster title earlier in the year – before squeezing past both en route to reaching the championship final. They denied Coláiste Eoin a hurling-football double in the last four; their opponents in the final, Naas CBS, are going for three-in-a-row.

“They’re mad to play this final. They’re enjoying putting up the different things that they’re doing to stay ready on WhatsApp and it keeps them busy,” says Dempsey. “They are witty and good-humoured lads and they are living in great hope that this will be played. And we give them that hope by staying positive that things will improve as weeks lead into months.

“There’s only 400 boys in our school and Naas have something like 1,200 boys, so we’re underdogs. They’re such a big and strong team, they were beaten narrowly in the All-Ireland final last year, and they’re going for three-in-a row. But we don’t mind that.”

Meanwhile, rugby’s Leinster Schools Senior Cup final between Newbridge and Clongowes has also been postponed. Although not yet cancelled, Leinster rugby are not understood to share their GAA counterparts’ commitment to getting it played.