Youthful Wexford ready to become the boys of summer 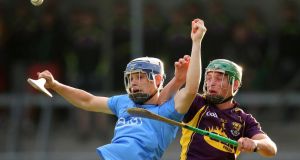 It’s not the GAA story of the summer, not by a long shot, not unless Wexford can do what they threatened to do last Saturday in Ennis.

On Wednesday night’s showing in Parnell Park – the clinical dissection of Dublin in the Leinster under-21 hurling final – that is not outside the realm of possibility.

The performance was confirmation that an ancient hurling county has awoke from slumber. Nine of the panel immediately rejoined their senior brethren.

Only problem is Clare have been up and out of their lair, spreading to full wingspan for over a year now. Still, Wexford Park tomorrow evening should prove very interesting viewing.

Watch out for Conor McDonald near the Clare goal. He stuck 1-1 on the All-Ireland champions in the draw before feasting on Dublin for 1-3 the other night. The sliotar sticks to his hand and he finishes with that same ruthless intent seen only from the best strikers. In any sport. His latest goal is proof of that. It didn’t seem possible until the net shook.

Liam Ryan is another. A ferociously combative figure, the Rapparees full back left the field bloodied against Dublin but not before dumping Paul Winters into the turf instead of allowing Dublin’s best attacker a clear sight of goal.

The worry is their conditioning entering game three in six days.

“Liam was the only one that played the full 90. But they’re young men. They’re obviously well able for it. Conor Mac was still flying there at the end. I’ll tell you what, we would have had to get a tractor to pull him off the field.”

McDonald will always get goals as Ryan will deny the opposition the chance of them but Guiney is perhaps their most valuable asset.

Of his 0-8 against Dublin, six were from placed balls that made him look a very assured golfer. Against Clare his power surge helped swung the battle for possession. A robust hurler of genuine ability, and he’s still growing.

“You don’t want them over hurled,” Doyle agreed, “but, listen: they’ve gained great experience. The boys were as fit as fiddles. They’re young men. People are maybe worried about them going ahead on Saturday evening but they’re so buoyed up I’d say they’d play Clare later on tonight.

“The boys will be flying tomorrow. I guarantee you that when they get the crowd behind them in Wexford Park.”

Doyle was asked if they needed minding from themselves. The enthusiasm of youth and smell of success could make them impetuous. Such an ailment has a name: Victory Disease.

This is their normality.

“These lads are getting used to winning and that’s something that hasn’t been there. We’ve come to Parnell Park at minor and under-21 and senior and lost by two or three or four points.

“You know, we kind of accepted it, ‘God, we pushed Dublin tight’. But pushing tight is no good to these lads. We need to win, otherwise it’s a failure.”