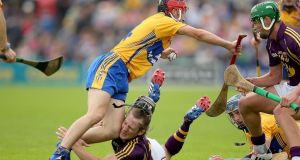 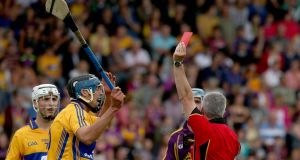 Wexford deposed All-Ireland champions Clare amidst extraordinary scenes of jubilation in Wexford Park this evening before the venue’s biggest crowd since the 2001 redevelopment.

Having apparently fluffed their lines when holding a two-man advantage over their opponents by the end of normal time, the home side surged in extra time and had the added satisfaction of beating 15 men and doing it the hard way.

A goal at the end of the first half of extra time finished by Harry Kehoe overturned Clare’s apparently growing ascendancy to give Wexford a two-point lead, 2-20 to 2-18, as the match paused before the final 10-minute testing.

Although the champions again caught up, they never regained the lead and with the match poised at 2-22 each, Wexford broke for the line. Jack Guiney, a model of consistency off dead balls, stroked a point from play and followed it with two frees to drive the stake through the champions’ heart.

And what heart they had showed. Clare demonstrated for the first time this summer the stuff of champions when under phenomenal pressure in the last quarter, reduced to 13 men, they sustained themselves on scraps. Never giving up, they always seemed able to eke out another point to keep either in touch or level.

Wexford’s composure evaporated and they failed to set up sufficient attacking positions to put the match away, even though their forwards looked to have the beating of their markers.

At the start both sides played with a sweeper – Clare replicating the switch which had tightened up the defence in the drawn match in Ennis. Replacement Séadna Morey, sent in for captain Patrick Donnellan before the throw-in, dropped back for Clare with Tony Kelly filling in at centrefield.

The experienced and resourceful Keith Rossiter played the role for Wexford and led another gritty performance by the team’s defence with Eoin Moore and Andrew Shore again prominent.

The first quarter was full of sound and fury, signifying if not quite nothing, little enough on the score board. It concluded with Colin Ryan converting a free to push the champions 0-3 to 0-2 ahead.

Diarmuid O’Keeffe equalised but during the next five minutes Clare made what looked like a decisive move, hitting 1-2 without reply to lead by five while playing against a significant wind.

The goal came from a momentary lapse of concentration by Wexford captain, Matthew O’Hanlon, allowing Darach Honan to peel away and take Colm Galvin’s nicely judged ball in on the square. Honan stepped back inside his marker and finished to the net.

It had followed hot on the heels of points from John Conlon and Tony Kelly and seemingly Clare were set fair. Their game showed improved intensity from the drawn match and their calm use of possession was in marked contrast to Wexford’s customary compilation of industrial quantities of wides – 11 in the first half.

Conor Ryan was imperious in their half-back line and John Conlon – a sterling display for 1-5 throughout – combined with Honan up front to pose serious questions of Wexford.

But the match lurched as it had a week previously. In a ruck for the ball near the Clare goal, Brendan Bugler gave the butt of his hurl to Conor McDonald and was immediately red carded. Clare got some relief when an apparently good goal by McDonald was ruled out for a square ball but the outcome was now right back in the balance.

Wexford thundered out for the second half and quickly equalised with points from Liam Óg McGovern and a Paul Morris free. Clare rallied and their composure made it clear they were capable of steering themselves to safe harbour even if slightly under-crewed. By the 46th minute they were three clear, 1-10 to 0-10.

The next twist probably condemned them, though. Jack Browne had been in serious trouble on the effervescent McGovern and having been yellow carded for one foul, looked to have escaped with another – with yet another in between – but a consultation between referee Johnny Ryan and linesman Barry Kelly led to the second yellow in the 48th minute.

Despite this when the heroic Conlon emerged from a ruck to shoot Clare’s second goal, they looked like they had given themselves an excellent chance to crack the challenge at 2-10 to 0-11.

What happened next was the match’s most influential score – the indefatigable McDonald scored a third goal in eight days over three matches, having lined out for the under-21s in their Leinster final win on Wednesday, like Guiney and Liam Ryan.

The assist came from the veteran Rory Jacob who then added a point followed by McGovern’s equaliser – the five-point deficit wiped out in three minutes.

Wexford spent the remaining time on the verge of winning the match but nerves crept in. Balls were dropped and even uncontested catches were missed.

At the other end daft shot selection led to wides. Harry Kehoe and McDonald hit two at the end of normal time with Wexford just a point ahead, 1-18 to 2-14. A late attack led to a ’65 which Colin Ryan rifled over.

It should have been salvation for the champions but Wexford were not to be denied. They could have won this fixture at three separate junctures – by full time in both matches and even by the end of extra time last week.

Morris, who’d had a rough time on frees until Guiney took over, was reintroduced in extra time and shot three points from play. The rising waves of excitement eventually broke on Wexford Park carrying the team into next week’s qualifier round two against Waterford in Nowlan Park.