Waterford to appeal after Tadhg de Búrca ban is upheld 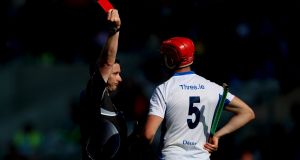 The GAA’s Central Hearings Committee (CHC) have upheld the one-match ban handed to Waterford’s Tadhg de Búrca in the wake of his side’s All-Ireland quarter-final win over Wexford.

Waterford are expected to appeal the decision, which would rule the defender out of the crunch All-Ireland last-four clash with Cork on August 13th.

De Búrca picked up the suspension after he was sent-off for an off-the-ball clash with Harry Kehoe during the Déise’s 1-23 to 1-19 win in Páirc Uí Chaoimh last month.

He was cited for: “a category III (iv) infraction, specifically ‘behaving in any way which is dangerous to an opponent, including deliberately pulling on or taking hold of a faceguard or any part of an opponent’s helmet (in hurling).”

Should that avenue prove unsuccessful, they will take it to the Independent Disputes Resolution Authority (DRA) in a bid to have the Clashmore-Kinsalebeg sweeper available for their semi-final clash in Croke Park.