Waterford pull out of Antrim clash due to Covid-19 concerns 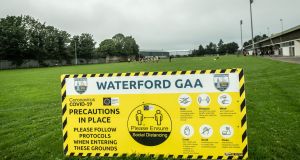 Waterford have pulled out of Saturday’s Allianz League Division Four clash away to Antrim due to concerns over Covid-19. Photograph: James Crombie/Inpho

Waterford footballers have conceded their final league Division Four fixture against Antrim in Portglenone this weekend following the withdrawal of a number of players from the match panel. In a statement on Friday morning, issued jointly with the county board, it was stated that health concerns about Covid were the reason.

Those concerns centred on the family circumstances of some players and the attitude of employers, who according to the statement were looking for members of travelling party to isolate for two weeks on their return from Northern Ireland.

“The decision was reached,” runs the statement, “following the withdrawal of a number of the panel members due to:

“The employers of several players and members of the team management stipulating that a 14-day isolation period would be required on returning from Northern Ireland.

“Serious consideration was given to these two major factors along with the possibility of any incidence of Coronavirus transmission to any of our travelling playing group with a turnaround time of seven days to the Munster championship.

“Unfortunately, having weighed up all the options and having regard to the genuine concerns of our players, we had no choice but to concede our final league match versus Antrim this weekend.

“At the end of the day, our players come first as they have put everything on the line to date to make themselves available to play for their county and irrespective of the impact our decision may have on the final league standings, the management team felt obliged to respect their health and welfare concerns in not wanting to have to travel to Antrim this Saturday for a 2pm throw-in.”

Waterford were out of the promotion picture but Antrim had an outside chance should the top two clash in the division, between Wicklow and Wexford, end in a draw of finishing in a three-way tie for a promotion place but according to rule would lose out on scoring difference, having lost last week’s match in Wicklow by a whopping 25 points.

The statement does say that Waterford tried to have the fixture re-arranged at a venue removed from Northern Ireland where the Covid pandemic is particularly severe.

Antrim offered a different venue within the county but were unwilling to travel. Waterford’s statement leaves the door open for the fixture to go ahead.

“We would like to reiterate that Waterford were and are prepared to play our final League game against Antrim at a neutral venue in the Republic and we think that given the current circumstances, this is a reasonable request.

“This is not a decision that we have taken lightly, particularly given the fact that our game versus London scheduled for last weekend also fell victim to the Covid-19 crisis, which puts us in a very vulnerable position going into the first round of the Championship versus Limerick on Saturday 31st October, given that they will have had the opportunity of having played two league games.”