‘Ultimately it will be a health call’: Will O’Donoghue on a return to action 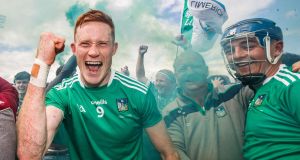 Don’t stop me now . . . If any team felt unhinged by the abrupt lockdown on the GAA season it might have been the Limerick hurlers, in the short-term at least, although midfielder Will O’Donoghue certainly doesn’t see it that way.

After a very different sort of abrupt end to last season – surrendering their All-Ireland title by a point in the semi-final against Kilkenny, a game also remembered for the late equalising chance that was never given – Limerick were particularly keen to get back on the field of play; perhaps more so when in late November, the county board confirmed two players were sent home early following an incident in New York after the Hurling Classic.

Time so start anew, which is exactly what Limerick did – unbeaten in their opening five games on the Allianz Hurling League, waiting on a semi-final opponent and the chance to defend the league title also won in 2019, their first in 22 years.

Asked that exact question now, how desperate O’Donoghue is to get back on the playing field in the wake of Covid-19, or when he thinks it might be safe to even consider a 2020 championship, he is far more keen to point at the bigger picture.

“If I could answer that question I’d say I’d be on the news this evening with Tony Holohan, ” says O’Donoghue, who also ended 2019 with an All Star nomination at midfield.

“It doesn’t matter what I say, or other players or ex-players or any manager. Ultimately a championship will only take place if the health powers that be say it is safe to do so, whether that is behind closed doors or open gates, you still have to have training sessions too. Ultimately it will come down to their advice and not the players’. Ultimately it will be a health call.”

Like all such players in lockdown, O’Donogue has been retaining a home-fitness and exercise programme. He’s also still actively employed with a food distribution business, out of Shannon, which adds to his sense of perspective: there are others much worse off than he is.

“I suppose the most recent bit of training is this 5km run that I’ve been nominated to do on social media, and struggling to complete. Obviously you can’t replicate the same intensity as in the regular season or regular training, but I would imagine most players and most squads are trying to keep a decent level of fitness.

“I’ve read several articles from people of that ilk, and they’ve all said just because you have nothing else to do doesn’t mean you just train, train, train; because there’s dangers with that as well. Everything is fairly monitored and regulated, so it’s not like we’ve just gone mad on training because there’s nothing else to do. There’s no designated times or GPS trackers, everyone is just expected to keep up a decent level of fitness through a template of work, but I mean there’s no iron fist in terms of what we have to be doing.

“There are a lot more people begging out for a date including nurses and frontline workers and doctors who are probably separated from their families due to their line of work at the minute.

“I’m fortunate in the sense that I am still working. And that has kept a lot of structure to my days so I haven’t had to deal with my routine being completely turned upside-down. In that sense I work 8-5 and it is late in the evening by the time I get home.

“I also have a grandfather in a nursing home in Newcastle West, and another grandmother who lives on her own in Abbeyfeale, in west Limerick. So when we talk about how eager we are to go back training, or how eager we are to have a championship, I’m equally eager to go back and visit my grandparents sometime soon. That’s very much on my radar too, that hopefully I can visit them in the not too distant future.

“Hurling is a way of life, entertainment, but this [Covid-19] is impacting a lot of people on the frontline, sacrificing every minute of their day.”

O’Donoghue certainly remains open to the idea of a 2020 championship, even if it doesn’t begin until September or October, although again he won’t be the one making that call.

“If we’re talking about a closed-doors championship, on the grounds that it has been given the go ahead by health officials, obviously, given the lack of entertainment in people’s lives at the minute, I’m sure games would give an awful lot to a lot of people who are isolated at home, could be something to look forward to.

“I can see people’s points in terms of for and against closed doors, with regard to atmosphere. Players saying it might lack intensity and stuff like that. You never really know, it has never been implemented, never been forced to happen.

“If it was safe to do so, if we had come into a period of time where social distancing had disappeared and we were able to have a behind closed doors, if that was the next best option, and it was safe for the players, I wouldn’t see too many players having an issue with it. Then again, that is up for debate. We’re not a professional outfit.

“But I can’t see why players wouldn’t want games, but then without any collective training, for the guts of seven months, would that feasible, to have a quality championship?

“It’s important to look at life in general, before we consider the whole GAA thing. I’ve friends who are doctors or working in medical practice, so it would be a bit rich of me to say I’m missing hanging around with the lads. That humane side should be much more prominent, compared to the games. I want to play hurling as much as the next lad, would love to see a championship, but unless it’s safe to do so, and no one is at risk, then there won’t be any games. If the GAA puts people at risk, you won’t get a uniform buy-in from all the squads.”