With Eamon O’Shea set to leave, defender doesn’t want any regrets at end of season 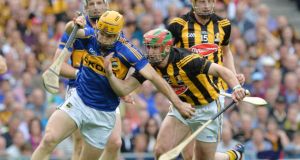 Kieran Bergin is adopting a light-hearted view on the injury sustained by fellow Tipperary defender Pádraic Maher, at least for now. Maher injured his shoulder in their Munster hurling final win over Waterford, and although there is no immediate threat of him missing their All-Ireland semi-final on August 16th, he will face a spell on the sidelines.

“He was in a sling Sunday night, and I think it’s something to do with his AC joint,” said Bergin. “I think it’s three weeks in recovery. It all really depends on the scan.

“Hopefully he’ll be able to get back for us because he’s been a key player for us. He’s like a Dyson Hoover back there, he mops up so much ball.

“Without him, we would be in a bit of trouble. And it would probably mean my workload would have to increase.”

Still, with five weeks to go before their next game, Bergin can afford to be optimistic. The more immediate concern is how to best deal with that gap, not knowing yet whether they will face Galway or Cork.

“Sure look it, anybody who knows us in Tipperary knows we do tend to get carried away with ourselves a little bit and we let things get to our heads,” he said, continuing in light-hearted mode.

“We’re just going to try and stay grounded this year. I think the backroom staff we have now will keep us seriously grounded and focused on the overall goal. We didn’t sit down in October and said we would be happy with [winning] Munster. We want the Liam McCarthy and the Tipp fans deserve it. We’ll get down now and focus on whoever we play in the next five weeks.”

He also admitted that with manager Eamon O’Shea confirming it would be his last year, there was no more time for regret. “We don’t want Eamon coming into dressing-rooms now saying ‘well done’ whatever and having a meeting the next day and saying ‘where did we go wrong’ this, that and the other. We’re all sick of those meetings after the last few years.

“And from the media, he did take an awful rap, and he absorbed every bit of it. Even last year when we were going terrible during the league and a relegation battle was possible, he took everything. We were trying to implement a system at the time, a belief in ourselves, but not once did he come in and say ‘lads, we need to do this...’ He just said ‘stick with the plan and stay going’. That confidence he showed in our ability inspired us a little bit to say ‘look, maybe we need to pull the finger out a bit and start doing a bit more for him’.

“He’s a great man. Eamon just wants what best for you outside of hurling as well. He wants to bring out the best in you. A lot of lads are starting to see that now. He’s a really good person.”

Bergin also had nothing but good things to say about Noel McGrath as he returns to the panel after treatment for testicular cancer: “I think he’s frustrated with himself. He thought he would have been back. I spoke to him a few months ago after he done the chemo and he said he thought he would be back for the Munster final. He thought he would be back two weeks before so he would have been eligible to play. He’s doing a bit of training with us but not at the same level. He’s slowly building it back up with the help of the physios and the physical trainer. He’ll come back stronger than ever now and we’re starting to see the funny side of it now, too. On Sunday there was a bit of banter and slagging towards him.”

Meanwhile, the Clare county board have confirmed that Davy Fitzgerald intends on seeing on his remaining two years as hurling manager. Fitzgerald was given a one-year extension last summer, having been granted a three-year term after leading Clare to the 2013 All-Ireland. Colm Collins will also continue with the county’s senior footballers.

In a statement released yesterday evening, Clare county board chairman Michael McDonagh said: “I am delighted that Colm and Davy are committed to remaining in their respective positions for 2016. While everyone associated with Clare GAA is disappointed with the progress of both teams during 2015, we firmly believe that they are better things in store, and both Colm and Davy are the right people to lead their teams forward.”