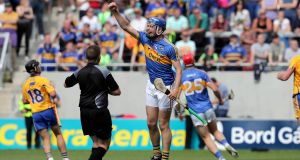 Cork’s new Páirc Uí Chaoimh threw its gates open on Saturday afternoon for the first of this year’s GAA All-Ireland hurling quarter-finals in a match redolent of the old ground’s history but which on the day provided a wan enough snapshot of the visceral past.

It wasn’t that Clare and Tipperary didn’t serve up a diverting enough afternoon but it lacked the brimstone of a full-on championship battle and by and large conformed to expectations in that Tipp’s forwards were far more accomplished score takers and seemed able to help themselves any time the team needed to tip the accelerator pedal.

The single score between the teams gives a slightly misleading impression in that Clare scrambled a goal in the dying seconds from replacement Cathal McInerney to gloss the result.

In terms of the champions’ evolving prospects though, the recurrence of some doubtful defending remained a ghost in the machine that will haunt them against stronger opposition. The three goals conceded provided the match and the opposition with an oxygen supply.

It will give Michael Ryan some anxious moments in the video suite, as on occasion Clare successfully attacked their opponents’ most celebrated strength, the ability to win ball in the air and the first two goals came as a consequence.

In the 19th minute Conor McGrath – who had earlier had a goal ruled out for over-carrying – availed of a break to speed in and set up Aaron Cunningham for a well-taken goal and a minute later Shane O’Donnell leaped highest to pluck the ball, and also give Cunningham a scoring pass. These interventions wiped out Tipperary’s painstakingly built six-point lead but as they would do in the second half, Tipp responded and regained the lead and in the minutes before the interval they clipped on a further four scores to lead by five, 0-16 to 2-5.

Even if they ran second best for virtually the whole match, Clare did launch a spirited comeback in a 10-minute spell from the 57th minute. It was started by Tony Kelly’s defiant point from halfway and concluded five points later with just the minimum between the teams. In the midst of the barrage full forward Cunningham chivvied a goal chance out of Tomás Hamill under a high ball and came close to beating Daragh Mooney in the Tipp goal but his shot billowed the net from the wrong side.

Stung by the response, the winners rat-tat-tatted five – a variety of scores from easy free to long-range free to finely sniped shots from replacements Jason Forde and Steven O’Brien as well, inevitably, as a signature point by John McGrath – in response and that was that.

The pre-match perception – strong as the belief that the traffic around Cork would be shocking and equally as realised – was that Tipperary’s forwards would have benefited from finding their range against Dublin and all of them apart from Dan McCormack scored from play for a total of 0-19 not including frees.

Yet Clare defended well for long periods. Conor Cleary contained Bonner Maher and they were frequently first out to the ball and capable of harassing possession out of the Tipp forwards. The problem remained that when they did get chances, Michael Ryan’s team were lethal and needed less time and space to shoot their scores. They were assisted by some poor Clare puck-outs and a high error count.

Between them the McGrath brothers got 10 from play. John was quicksilver. Six points from play and no wides, his total included scores where he had to conjure the space to shoot and was always on hand to support colleagues and finish.

Tipperary stuttered when they looked like running away with the match. Just minutes into the second half they defended well and a sweeping counter-attack ended with John O’Dwyer flicking the ball to a perfectly positioned Séamus Callanan but he blasted over the bar.

Yet at the start of the final quarter John McGrath set up his brother Noel for a point and when the latter did the same for Bonner Maher, Tipperary led by seven and a double-digit win looked on the cards.

It turned out more complicated than that but the outcome never fully drifted back into play, as Tipperary finished strongly.

The new venue looked lovely in the sunshine but the pitch had a few teething problems, lacking a true bounce at times and looking a little slippery on occasion. The crowd was a slightly disappointing 28,567 given the hopes that it would break 30,000 but the new Páirc Uí Chaoimh is up and running and will know many greater dramas than its opening production.