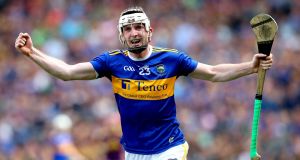 Séamus Kennedy celebrates at the final whistle after Tipperary’s victory over Wexford in the All-Ireland semi-final at Croke Park. Photograph: Ryan Byrne/Inpho

Impossible as it is for any player to completely isolate himself from all the hype and hullabaloo of All-Ireland hurling final week, Séamus Kennedy at least has a better chance than most.

Living in Waterford, and working in Cork, Kennedy is still close enough to the Tipperary border to sense what Sunday’s showdown against Kilkenny means to the county. He was also part of the Tipperary team that beat Kilkenny in the 2016 final, completing a particularly special 12 months for Kennedy in both hurling and football.

He’s arguably more rooted in football too, which also helps, one of the last dual players at minor and under-21 level, before going fully over to the senior hurlers in 2016. Not that Kennedy is purposely trying to avoid all the hype either.

“My mam is from Waterford, we’ve moved out there a good few years now, so I’m not really stuck in it,” he says. “I’m currently working in Cork, with Dornan Engineering in Little Island, and living on the [Waterford-Tipp] border there with Clonmel.

“When I say I’m Waterford, I’m in The Nire, and The Nire and Clonmel are neighbouring parishes. Mam is from The Nire and Dad is from Newcastle just outside Clonmell so we moved there when I was about 12.

“I was already well stuck in with Mary’s and Commercials at that stage [his Tipperary clubs in hurling and football]). And I suppose yeah, growing up, it was definitely more football that I would have played and we’d have been a lot more successful underage at football and, you know, a lot of our lads are on the Tipp football panel now at the minute but we would have had reasonable success in St Mary’s [hurling] at underage.”

Road to the final graphic Hurling

After first marking his mark with the Tipperary senior footballers, he turned more to hurling from 2014, and by the end of 2016 has won a Fitzgibbon Cup with Mary Immaculate, a Munster football title with Clonmel Commercials in December 2015, before making his senior hurling debut with Tipperary in 2016, against Cork, all topped up with Munster and All-Ireland medals.

“To be honest, it wasn’t difficult at all,” he says of his decision to focus on his county hurling . “And that might sound terrible, but for me growing up, the only thing I ever wanted was to play hurling for Tipperary. Dad would be a huge Tipp hurling fan from the Newcastle club just outside Clonmel.

“I would have always gone to games with him from a very young age. Do I love football? Absolutely. yes. Do I miss playing? Absolutely, yes. But when the decision came and Mick [Ryan, then Tipperary manager] rang me it was a no-brainer for me, to be honest.

“I was absolutely delighted for the lads themselves and 2016 and the run they got on to the All-Ireland football semi-final. Some of my best friends we’re playing in that, lads I lived with in college and I’ve grown up with were playing so I was delighted.

“Although Clonmel is a big football and soccer town there is a very strong core of hurling supporters down there. Like if you go to a St Mary’s match, chances are there’ll be more at the St Mary’s match than a Commercials match – there’s a big following there of the St Mary’s club. I don’t know for whatever reason, there just seems to be. Both clubs have been absolutely brilliant for me and my development in every way, you know, so I owe them an awful lot.”

Kennedy is also quick to heap praise on Liam Sheedy, who gave Kennedy only his second start in the Tipperary half-back line this summer in the semi-final win over Wexford. He’d also started the Munster final defeat to Limerick.

“Look, at training, he [Liam] just said he had a job for me to do and obviously I was absolutely delighted to get the nod. I’ve been in and out of the team this year so any day you do get the nod it’s an absolute privilege to be honest with you.

“We had a quick chat with me and away you go. It was up to me then to do the job for the team. As I said, absolutely delighted. And not really worried, no. I suppose maybe a bit of experience now that I played in 2016, ’17 and last year as well. I had been in those big days before, you know, so I was able to draw on that experience, which was a big help.

“Not every game takes on a life of its own and the last day it certainly did, you know, so it was great to be part of the game again especially when you come out the right side. It’s no different again, we’ll take our learnings from the Wexford game. We obviously have things to improve on and, you know, we’ll try to get ourselves as right as possible for Kilkenny.

“And with Liam, the energy, he’s so infectious, not just at a match, it’s at training and it’s whether you’re meeting him or a phone call with him, his energy is completely infectious and it gives us all a great lift. It’s just great to have around the place and he’s great guys with him too. They just complement each other very well, going into the training on whatever night it is like you just can’t wait to get going.”

This week is already better than 2018 when, given Tipperary’s early championship exit, Kennedy was trying to escape the championship hype in another way.

“I went on holidays to Sorrento for some of it. I wasn’t rushing down to the local Irish bar to watch it but when I was in there, I’d watch it and yeah, look, I suppose you did watch it. I did watch the two semi-finals, they were unbelievable.”