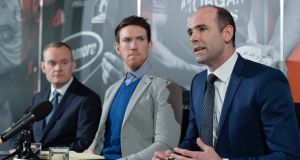 Séamus Hickey expects Limerick to shake off last Sunday’s hammering at the hands of Cork when they take on Clare in Sixmilebridge on Wednesday night. While the Munster Hurling League isn’t an important competition on any level, Hickey concedes that a seven-goal beating has to bring a response.

“That’s a no-brainer,” he says. “We have to put up our standards. You can’t accept that as a normal standard, no question. There will have to be a response. It’s not going to be tearing down walls but we have to up what we consider to be a normal standard and what’s acceptable from our group.”

“That’s why we’ve got Galway last and Wexford first, which are two huge games for us, as will be every game in between. Because we’ve found in the past that if you take anybody for granted you find your first part of the year is a disappointment and you have to regroup and go for the championship.

“We’ve proved before that league and championship don’t normally correlate and we’ve produced performances but I always like to get out of where we are.”