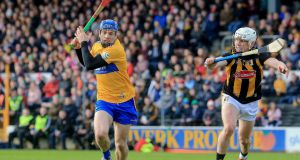 Clare’s Shane O’Donnell has plenty on his hands as it is as he completes his PhD. Photo: Bryan Keane/Inpho

In many ways, save for one or two in particular, the shutdown has been a benign enough interruption to Shane O’Donnell’s schedule. He’s in the middle of writing a microbiology PhD, due to be published in November. He had one research project left to do and was about to wire into it when they shut the labs a couple of weeks back. It’s a speedbump rather than a roadblock but like everyone else, he could have done without it.

“I was waiting on some stuff to start my last project and it just landed in my lap there a few days before we got closed down. That was what I needed for maybe three months of lab-work and it would have been the finishing of my lab-work. So yeah, it’s unfortunate but at the same time, people are a lot worse off than me. I’m still able to do stuff to progress it.

“We’re able to do some lab stuff remotely but it’s probably delayed me by a month or two. In the grand scheme of things, it’s really not that big a deal. I’m compiling results now, that’s the stage I’m at. If it was a month or two later, it would have been perfectly timed in fact – not that that’s the most important thing at the moment obviously.”

We’re all virus experts now, of course. O’Donnell’s area is microbiology – his PhD is on gut bacteria and non-digestible carbohydrates – but he is at least knowledge-adjacent to all the stuff that has gummed up the gears of the planet. Put it this way, he knows far more about what he doesn’t know than the rest of us.

“I think possibly before it got very serious, we were very interested in it, purely from a scientific point of view. We would have talked about it quite a lot in the lab when it was a far off thing in China back in December and January. When it’s that removed, you can talk about it in the abstract and even be a bit cold about it. Which is not fair or right either but it’s probably true of most people – if something is far away, that’s just how your brain processes it I guess.

“Obviously when it gets more serious and closer to home, you stop seeing it like that. You don’t have the luxury to be fascinated by it. We would do a lot of genome analysis stuff so I would have been very interested in tracking the genetic changes to the virus, what viruses it came from, the mutations and so on. There would have been a couple of us very interested in that stuff.

“What they’ve found though is that it basically isn’t mutating so that side of it becomes less interesting. And obviously, that’s all overtaken now by the effect it has had on the world and the moves everyone has to make to stay safe and keep it in check.

“So I’m very similar to everybody else now really. I’d watch the news and listen to the actual virology experts telling us what to think, which is how it should be. The one thing is I’ve never seen so much molecular biology on TV before. It seems like it’s time for scientists to get their due for once, which is good to see. Obviously, it’s not a good way for it to happen but it’s good to see all the same.”

Getting out into the fresh air and away from the computer is more important than ever. His Clare teammate Aaron Cunningham described it the other day as feeling like the week after you go out of the All-Ireland, except there’s no club championship up ahead. Down-time is not a problem. There’s any amount of it to be filled, PhD or no PhD. All his duties and dealings on the Clare front are still out there but they’re hard to grasp at.

“It’s not obviously the same kind of training but I do have a bit of time alright. You do a small bit. It’s hard for the management to try and keep things ticking over. They’d be trying different incentives… not even incentives but they’d be putting up skills challenges for people to aim to get a certain score or whatever. Just keeping people thinking about hurling, keeping it on our minds. But it’s difficult.

“I’m lucky, I have a garden where I have space to play in. And my brother is at home as well and we’re able to tear chunks out of each other a small bit. So at least that side of it is there to keep us entertained some small bit. But it’s not the same obviously.

“What you long for is not what you expect. You might think it’s the nice little pieces of skill that you pull off in a tight spot that you miss doing but it’s actually not. It’s more the rough and tumble of it. That’s what you can’t recreate on your own.”