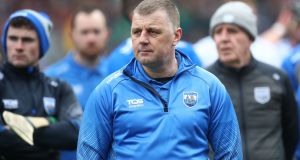 Waterford manager Páraic Fanning: “I think the GAA could concentrate on a few other things, more pressing for everybody, club players and county players than worrying about top players are trying to prepare for a championship.” Photograph: James Crombie/Inpho

Waterford hurling manager Páraic Fanning has described the GAA’s intention to prohibit all foreign training camps as “a load of nonsense”.

There was a slight relaxing of the rule this year, on the back of 2019 Congress, whereby senior intercounty teams were allowed to travel in the otherwise “closed” month of April provided they received advance permission from the Central Competitions Control Committee (CCCC).

Fanning’s Waterford team spent five days last week in Portugal at a resort in Monte Gordo, in the Algarve, returning last Friday evening, ahead of their Munster hurling championship which begins at home in Walsh Park on Sunday week, May 12th, against Clare.

Advance permission was given for the Waterford trip, and likewise the Armagh footballers, who also went on a team training holiday to Portugal earlier this month, having been granted permission from CCCC.

However the GAA have since announced their intention to prohibit such foreign trips, from next year, with further restrictions also being placed on home-based training camps, which will no longer to be able to exceed three days.

For Fanning, in his first season as Waterford manager, such trips can be highly valuable in terms of championship preparations, and not necessarily any more expensive than a camp at home.

“Yeah, we got it all approved,” said Fanning said of the trip to Portugal. “Even last year we were one of the few counties who played our four club games in April last year, and we still got punished. This year, we looked for approval and we went away and we had a week’s training, well not quite a week, a few days away training, and it went well, a nice spot.”

Asked if the GAA were right to be cracking down on such trips, Fanning said: “I think it’s a load of nonsense, being totally honest. I think the GAA could concentrate on a few other things, more pressing for everybody, club players and county players than worrying about top players are trying to prepare for a championship and doing their best to prepare properly.

“Be that home or abroad, wherever it is. I don’t think they should be too concerned, as they seem to be about it. I could think of far more pressing issues.”

In his first season in charge, having succeeded Derek McGrath, Fanning is trying to build a fresh bond in the team, and believes trainings camps play an important part in that process, especially as players don’t otherwise spend extended periods of time together: “I think they are vital. It’s one of the few times you get a chance, especially after the club championships, that you get everyone back up to speed again.

“So the fact that we’ve normally been at home most of the time, we went away this year. I think this is something that the GAA talk about, sitting down in a room and [deciding] what’s best. The hierarchy are talking about that. It would be good to have a talk and a good consultation about that and then make an informed decision, rather than making a decision without talking to anybody.”

The cost of going away, he said, doesn’t necessarily exceed the costs that arise by a home-based camp. “Have they researched it? Are they aware it saves money? Is there proof of that? There’s a cost here in Ireland, so you’d have to check it first, it’s easy to pick something like that to zone in on.

“To be honest, we’re on top of the Munster Championship, so I’m not too bothered with what they’re doing next year. But I do think it should be reviewed. They should talk about it, and then make an informed decision that’s agreeable with everybody. I can see the arguments too from the GAA perspective. But I think it’s important that you get the feedback from the people who are at the face of it. That includes players, it includes managers. Of course it costs money. Everything we do at intercounty level has an expense. It’s the same at home.”

Armagh and Laois footballers both lost home advantage for one game in this season’s league for breaking the rules on training camps last year (Armagh travelled to Portugal, Laois went to Kerry). Dublin’s footballer travelled to France without sanction, similarly with the Wexford hurlers in Portugal, after priving their trips did not include training.

Motion 14 at Congress in February then made an amendment to Rule 6.45, governing the matter, passed on a vote of 93 per cent. The rule changed from “closed months/collective training” to “closed periods/collective training”, and, crucially, the following paragraph was added: “Collective training for all senior inter-county team panels which involves an overnight stay is not permitted from April 1st to November 1st except during the 10 days prior to that team playing in a championship game (or 17 days, if the game in question is an All-Ireland final) unless written permission has been given in advance by the Central Competitions Control Committee (CCCC)”.

“It didn’t impact on our club fixtures, and it didn’t impact on our club fixtures last year,” added fanning. “I’m a huge club man. I’m still involved with my own club, Mount Sion. I always will be. I’m very much aware of the needs of [club players]. I think that’s one pressing issue. Everybody is talking about the calendar. We can talk about it all the time. We need to get it sorted for club players and county players.”

In the meantime Fanning expects to have a near full selection for the Clare game, the likes of Shane and Darragh Fives, and Conor Gleeson, due back from injury: “But in the overall context I think everyone is back.”