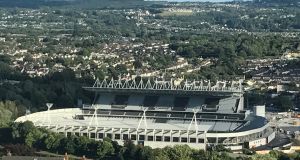 The new Páirc Uí Chaoimh will open up for the hurling quarter-finals on the weekend of July 22nd and July 23rd. Photograph: Cork County Board.

Uniquely high demand among the competing counties plus some novel neutral interest in the belated reopening of Páirc Uí Chaoimh has convinced the GAA to break from tradition and stage the All-Ireland hurling quarter-finals over successive days.

As expected the newly revamped Cork venue, which has a capacity of 45,000, has been confirmed to stage both games – Clare playing Tipperary on the Saturday July 22nd (3.0), Wexford playing Waterford on the Sunday July 23rd (4.0) – and, while the 45,000 capacity should be sufficient for each game had the GAA gone with the usual double-header, the demand might well have proved greater.

Having failed to reach its original opening date, intended to coincide with the Munster football or hurling finals earlier this month (a combination of technological issues and the failure to finalise security protocols in time forcing the postponement) the stadium was given the all-clear on Monday afternoon, following a final inspection by health and safety officers.

The decision to split the two quarter-finals was then taken by the GAA’s Central Competitions Control Committee (CCCC), whose main consideration when deciding to fix the games for successive days was that unusually high spectator demand of the four counties that have qualified, not least reigning All-Ireland champions Tipperary, and Wexford, who helped contribute to a record attendance of 60,032 at the Leinster hurling final earlier this month, where they lost to Galway at Croke Park.

Waterford are also expected to bring considerable support, having beaten Kilkenny for only the second time in championship history in last Saturday’s qualifier, and indeed the first time since 1959, the same year Waterford also won their last All-Ireland; Clare, likewise, also have high hopes for the remainder of the championship despite the five-point defeat to Cork in Sunday’s Munster final.

“We would expect there will also be some considerable neutral interest in the reopening of the stadium,” said a spokesperson for the CCCC. “But the main consideration was the expected demand for tickets from all four competing counties, and if it had been fixed as a double-header like recent years, the 45,000 may not be sufficient.”

Indeed the Wexford-Waterford quarter-final on the Sunday may well fill the new stadium to that capacity, given the additional backdrop that sees Wexford manager Davy Fitzgerald take on the team he also managed for four years, from 2008-2011.

These will mark the first games at the Cork venue since it was closed for a complete refurbishment in late 2014. The new three-tiered South Stand will house 13,000, while the smaller North Stand will take 8,000; the terraces at the City End and the Blackrock End both hold around 12,000. (For concerts, when the pitch space is also included, that will rise to around 48,000.)

The final bill on the revamp is expected to come in just a shade below €80 million. A combination of grants from the government, Croke Park and the Munster Council, as well as €10m from the Cork County Board itself, has made up the funding so far, with the intention that a shortfall of around €13m will be made up through the sale of 2,100 premium level seats. Roughly half of the available 10-year tickets have been either bought or sales agreed since they went on sale this spring at a cost of €6,500.

The Tipperary-Clare game, despite being from the same province, will be their first championship meeting since the 2011 Munster semi-final.

The Waterford-Wexford game will be a repeat of last year’s All-Ireland quarter-final, which was won by Waterford, by 0-21 to 0-11. After beating Kilkenny last Saturday evening, Waterford manager Derek McGrath admitted the relief in getting over that hurdle, but ambitions certainly extend further.

“There was some pressure to go the next step, after the way it went in Munster,” said McGrath, “but we’re not even at the next step yet. We’re only in an All-Ireland quarter-final, but we are advanced in terms of the opposition, so all we can do is take it on again.”

Football Round 3B qualifiers:

Football Round 4A qualifiers:

1 Jim McGuinness: There is a way to save championship and make it competitive
2 Waterford turn Kilkenny upside down and inside out
3 Autumn Nations Cup - Ireland v Georgia: TV details, kick-off time, team news and more
4 Waterford’s frenzied waves of attacks too much for Kilkenny
5 Once in a blue moon: Cavan’s overnight success 15 years in the making
Real news has value SUBSCRIBE

Mike Tyson and Roy Jones Jr fight to a draw in Los Angeles 12:18
Once in a blue moon: Cavan’s overnight success 15 years in the making 08:00
Limerick can count on the assurance that has eluded Galway at key moments 08:00
Reshuffled France see off Italy to set up England final 23:04
Conor Gallagher gets West Brom off the mark as Blades blunted yet again 22:43
Crossword Get access to over 6,000 interactive crosswords