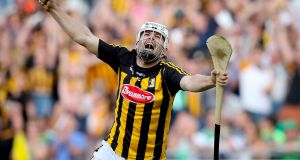 Lugh took a moment before knocking on the door one final time.

“Do you have anyone who can do all of these things?”

With that, the doorkeeper welcomed him in.

The first time anyone can remember Brian Cody laying down the law with Pádraig Walsh, it was a crime of passion that walked him into the dock. In the late, black-night months of 2013, Cody and Mick Dempsey had the Kilkenny panel down in Carlow IT for an evening of fitness tests to start pre-season. Walsh was 21 years old at the time and he existed in the twilight – not yet a Kilkenny hurler in the wider public imagination but, far more crucially, not not one in Cody’s.

In Kilkenny, the under-21 championship is a winter competition, with the final often one of the last bits of business to get boxed off before Christmas. Walsh had played for Tullaroan the previous night and gone over pretty badly on his ankle. Were he to pick up such an injury today, he’d likely have the sense not to subject it to an evening in Dempsey’s torture chamber. Back then, however, sitting it out would have been an extravagance. Far beyond what he felt he could afford.

Walsh had been a bright light at under-21 level for Kilkenny, playing in each of the previous three seasons. He’d made his debut for the seniors earlier in 2013, coming off the bench for Jackie Tyrrell a couple of times and starting against Clare in the league. But though he was generally well enough thought of, that’s all he was. There was plenty of room for pleasant thoughts to curdle. Ankle or no ankle, he wasn’t skipping the night in Carlow.

One of the tests was a 20-yard sprint, passing through three spots on the floor to calculate your acceleration, your start-up speed and your finishing speed. Walsh told nobody about his ankle and just put his head down and did it like everybody else. The only difference was that when he got to the end, he couldn’t stop. Not suddenly and not without drawing attention to himself.

Eventually, Cody noticed and went over to inquire what was up. “Ah, I twisted my ankle last night,” Walsh said. “But it’s grand, it’s grand.” To which Cody replied that it was not one bit grand and hunted him out of the gym to the physio’s room.

The main reason it stuck in anyone’s mind was that it confirmed to anyone watching that whatever hurling he may or may not have in him, Pádraig Walsh was coming in with the family attitude intact. If it was difficult to be introduced to the world as Tommy Walsh’s younger brother, Pádraig never let on. He came in and he hurled and he never took a backward step unless brow-beaten into it by the higher-ups.

Through the middle and back end of the decade, he has gone on to be a Cody failsafe. Good day, bad day, doesn’t matter. Walsh has been there. Since the start of 2014, Kilkenny have played 33 championship matches and only three players have appeared in each one – Paul Murphy, TJ Reid and Pádraig Walsh.

The difference between Walsh and the other two is that neither Murphy nor Reid’s job ever changes in any significant way. Murphy was Kilkenny’s designated spare man in defence for a couple of years against sweeper teams but otherwise he goes out with the same sentry gig every day. TJ is TJ, team leader, key attacker, game-changer, free-taker, goalscorer. Plenty of different roles that all basically amount to the same thing.

Meanwhile, Walsh is Kilkenny’s skeleton key, useful for all doors. Across those 33 games, he has lined out at full back, centre back, spare defender, wing back (both sides), midfielder and wing forward. He is Cody’s Lugh, capable of doing all things depending on the needs of the day.

“Brian has used him for the betterment of the team,” says Brian Hogan. “For a while, that meant full back. Brian’s instinct has always been to find a level of consistency and he was lucky over the years that he had Noel Hickey and then JJ Delaney there. What he wants most of all in 100 per cent trust in the person who is there. That’s why Pádraig would have found himself in there for a while, even though everyone knows what a brilliant player he is to have at wing back.

“The more he is on the ball, the better Kilkenny play. That’s mostly why you want him further out the pitch. When he plays for Tullaroan, he’s the main man in their attack. They play him at centre forward and he regularly scores 1-5, 1-6 a game. So you can see why he has moved around so much for Kilkenny. He’s just such a good hurler. Just like his older brother, he’s so bloody versatile. You can play him anywhere.”

The waters all bleed into each other but if you were to count it up, this is the fourth (and arguably fifth) different team Cody has built to bring to an All-Ireland final. The road to this one would have been smoother, not to mention shorter, if he’d been able to keep Walsh as a fixture at wing back throughout. When he’s playing there, it means Cody has his pillars in place up through the spine of the defence and across midfield. A temperature gauge for Kilkenny in the three years since they were last in a final is just how seldom they’ve been able to hand him the number five shirt.

“What people maybe don’t really see is that alongside being such a good hurler and strong in the air, he’s incredibly quick,” Hogan says. “You wouldn’t think it to look at him because there’s something in his gait that makes you think he’s only just jogging at times. But he’s unbelievably fast in a sprint.

“I’d say the way he runs is nearly connected to the sort of lad he is. Pádraig wouldn’t get too excited about anything. He’s such a laid-back, relaxed sort of a fellah and you can nearly tell that by the way he runs. But his top speed is hard to match. He has marked Conor Lehane stride for stride in matches and not many people do that. On top of that, he has an ability to strike the ball at full pace. Other players find they have to organise their feet to get a strike on the ball. He just glides and hits it sweetly.”

This summer alone has been a decent nutshell of both his worth to Kilkenny and the value they’ve squeezed out of him. He started it in midfield against Dublin before taking over the game when moved to centre back. Against Galway, he was holding the centre of the half-back line before shifting back into the full-back line for a while against Wexford.

In the All-Ireland quarter-final against Cork, it was Walsh’s despairing last-man tackle that knocked Patrick Horgan to the ground before the great man’s goal off his knees. Limerick withdrew Kyle Hayes, leaving him as the spare man – as a result, he barely touched the ball in the first half before coming into it more in the second. At all times, Cody would have loved to have had Cillian Buckley back, releasing Walsh to the wings and the thick of it but it hasn’t quite happened.

“It can sometimes count against players when they’re so versatile,” says Hogan. “If you were sitting down to pick a team tomorrow and you had the pick of all the country, he’d be one of your six backs. I don’t think anyone would really question that. And yet he only has one All Star. I’d be surprised if he doesn’t have two by the end of this year but even so, that’s amazing.”

On Sunday, the best guesses have him holding the middle and fighting in the air with John O’Dwyer. But those guesses may not be correct, at least not for the whole game. As ever, Walsh will go where he’s sent, shape-shifting as the situation demands.

It’s all he’s ever done.