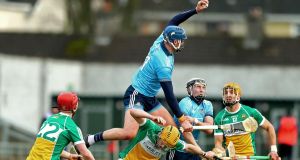 There was almost an air of inevitability about the outcome as Dublin recorded a comfortable win over Offaly in Tullamore.

Smarting from a first round trouncing by Waterford, Offaly fought gallantly and put it up to Dublin for a while but the impression that they were always swimming against the tide never wavered.

While Offaly had a brief glimmer of hope early in the second half, Dublin were never going to let it slip and they pulled away for a comfortable win.

In any language, a 13-point win is a resounding one this was a good solid performance by Mattie Kenny’s charges. They were sharper, more intense, more physical than an understrength Offaly side and from an early stage the only real issue was their winning margin.

With Donal Burke and Oisín O’Rorke in free-scoring form, 2-19 was a fine return for Dublin. Dublin had first use of a stiff wind and gave a decent first-half performance. An 11th-minute O’Rorke goal gave the visitors a 1-2 to 0-2 lead and put them in the driving seat as a fired up Offaly side showed dogged early resistance.

Colm Gath had a point with a good goal chance for Offaly and without doing anything overly spectacular, Dublin had one hand on the points as they led by 1-10 to 0-5 at the interval.

To their credit, Offaly tried very hard to make a game of it in the second half. With goalkeeper Eoghan Cahill finding the range with two long-range frees, they got the gap back to 1-10 to 0-8 and were beginning to believe they could bring it down to the wire.

Dublin, however, didn’t waste time in ending those illusions. A fine 46th-minute move ended with O’Rorke firing home his second goal and that was more or less that. Offaly failed to score in the closing 14 minutes as Dublin pulled away for a comfortable win.