‘Normally our efficiency is much, much higher than that,’ insists Clare’s co-manager 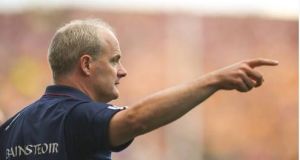 The game comes down to moments and some moments are more equal than others. Aron Shanagher was only on the pitch a matter of minutes and already he had whipped a point from a Peter Duggan sideline ball and now he was bearing down on the Galway goal. Find the net again like he had on his introduction last week and Clare would be heading for injury time leading for the first time in the game.

It wasn’t to be. Out came James Skehill to get enough on Shanagher’s shot to deflect it into the air, and when the Clare sub scooped at the rebound he could only find the right-hand post with it. Galway cleared the ball, and in the next breath Joe Canning sailed a typically gorgeous sideline cut between the posts. Championships hang on such teetering things.

“I had a little palpitation alright when he got it,” said Galway manager Micheál Donoghue afterwards. “He’s a massive player for them. He made a huge impact last week, and made a great start when he got the point today. But I think our boys worked hard, identified the threat, worked in numbers. They are the fine margins.”

Finer margins than Galway would like, of course. This habit they’ve developed of sprinting from the gates only to be chased down approaching the final bend has made their path to the final rockier than some of their play would suggest it ought to be. Whatever his thoughts on it are in private, Donoghue prefers to accentuate the positives in public at least.

“We got a good start, a good lead. Clare came back into it then. I thought our boys showed massive resilience. When the need was greatest they stuck with it. A lot of big players stood up and saw us home.

“I’ve said it many a time, you’re not going to dominate a game for 70 minutes. Testament to Clare, they’re a savage team, massive players. They took their opportunities wonderfully. Our boys showed massive heart and resilience to come back. Those qualities are never doubted with them.”

For Donal Moloney, the flip side has to be faced too. Clare were nine points down early in the piece for the second time in a week. He bristled afterwards when we asked him about whether such slow starts were just too much to overcome.

“It’s not a slow start,” the Clare co-manager said. “It’s nothing to do with a slow start. Galway have a level of capability – that’s three games running, the Leinster final replay, last week in Croke Park and this week. So they are not really slow starts, it is magnificent play by Galway the way they come out of the blocks.

“Fair play to that in terms of how they figure that. We always reckon it’s better to finish strong. It helped us this year, to finish big. Unfortunately we just ran out of time and space, and our efficiency came up a bit short. We were basically looking at, okay, the second half would be close on 40 minutes long, that’s the time to come with the big plays.

“Unfortunately, I suppose our efficiency let us down. Normally our efficiency is much, much higher than that, but it let us down a little bit. Having said that, this is game eight and our players have just been magnificent this summer. They’ve grown so much, and they left it all out there on the field.”

On the efficiency front, Moloney accepted that the loose Clare shooting would colour any verdict on the game. This will go down as one that Clare had a chance to win – and one they left behind.

“I think there’s always – look, if you shoot 17 or 18 wides they say things like that,” Moloney said. “When you get some magnificent scores and do some magnificent defending at the other end, especially in the second half, you’ll always have that.

“Look, I think we’ve always looked at this championship that the most consistent team will win through. The fly-by-night don’t survive in this. And fair play to Galway, they have been consistent over two seasons now. I don’t think we left it behind, I think they’re a great team.