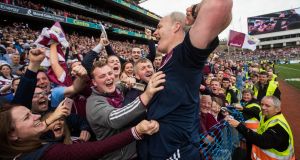 Micheál Donoghue celebrates with Galway supporters after his side beat Waterford to win the All-Ireland SHC. Photograph: Ryan Byrne/Inpho

So this is what happens when all the myth and the truth about Galway hurling combines. An All-Ireland title to finally close that gaping hole in the generation and yet won by players and management chasing no other destiny except their own.

After days like this, the only team they should be measured against is themselves, and still it’s impossible to separate them from those 29 years of teams of in between. A title for the here and now, and also the there and then.

In a game that ran from trap to line, came down to the proverbial wire, Galway were nothing but deserving winners – kicking inside the homestretch like a dream miler, without even a parting glance over the shoulders. It was a perfectly judged act and performance, the only doubt about the end result now was how Waterford stayed in it for so long.

In keeping with that – the here, and there – manager Micheál Donoghue paid immediate tribute to the players and management that came before him, as well he might: only when history judges this team on their own merits only his name will be attached to it.

“It’s an absolutely unbelievable feeling,” said Donogue, realising more emotion, and certainly joy, than at any point in his now two years in charge.

“And I said it for the last couple of months, I am in a privileged position here today, being the manager. It would be very remiss of me not to mention all the previous managers that have gone before me, that have helped nurture and develop these players.”

“And it’s similar for the players, who have represented Galway since 1988 and particularly in the last few years, some great players have gone through.

“It has been a huge collective effort, but the squad that we have presently, we have been saying it for the last couple of months, since the Wexford game, these boys have taken huge ownership and I think any management team that is in situ is trying to develop a team and a squad that take ownership and they have done it for the last couple of months.

“They have been questioned and doubted so many times, even in the build-up to the game, there were still references that they were chokers. Nobody came out and said these boys showed huge resilience and today, we knew coming up that we were in with a serious chance.

“And I think preparation from the semi-final to today couldn’t have gone any better for us. And I said it the last number of weeks to the lads, their experience was shining through.”

Experience counted though, especially when Waterford managed to steal an advantage early in the second half: other Galway teams might have doubted themselves, but not this one.

“We had a few setbacks in the first-half but the character and unity and everything that is built in this squad was shown in abundance,” added Donoghue.

“I thought we started pretty well, we went four or five up and then Kevin (Moran) got their first goal. But we still showed a lot of composure, where we a point up at half-time? The message at half-time was that we were doing okay, we knew that we could always increase the work-rate and our shape against their puck-outs. Any message or any direction we gave the players, they took it on board.

“They took huge ownership themselves in the dressing-room, at half time, and showed a huge desire to finish the job. And thankfully, they did.”

It was said, astutely so, that Galway would probably need goals to win this: instead 26 points, 19 from play, sufficed: “Look, that’s down to the quality of players that we have. Throughout the whole year, we have encountered different systems and different sweepers and the lads always had the capability of shooting from outside. It was about ensuring that we had the right lads out the field that were very capable of taking scores. Thankfully, that paid off.

“But I think we got a great start and once the confidence starts growing, and the belief gets bigger and bigger in the players, they are not afraid to shoot. But to shoot, you have to capable and we certainly have those players.

“Ah yeah, obviously they went ahead but I think the game at that stage was nip-and-tuck. We were still in it and we got one massive turnover down the Davin End. And the biggest thing from my perspective is the leadership and the character that these boys showed when the game was there to be won, and the desire they showed. The ownership they took, I can’t speak highly enough of them and today they got the just reward.”

For Joseph Cooney, who now matches the feat of his father before him, helping Galway to only a fifth All-Ireland, the spirit of the team went far beyond the 26-matchday panel, but rather the 34-strong panel, all of whom were brought onto the field for the pre-match photograph.

“Huge credit to Michael, and the lads, I was delighted to see those 34 lads come out for the team photo, fully togged. That’s a huge mantra for me in the GAA. I’ve never experienced that before, with previous managers, and I suppose that’s what we brought. We were in a bubble, all 34 of us in the one direction, and only for that I don’t think we would have got over the line.

“They’ve put the trust in us. We’ve been calling the shots since early in the league, the boys put huge ownership on the players on the field, and we said look, we have to drive this.  So every training session everyone is going in the same direction, keep going, full belief in one another, grind it out.

“This is everything I’ve ever dreamed of, the joy, this group of lads, put everything on the line, see each other at the finish and just embrace each other, a feeling we will never forget. Over-riding joy, hard to describe.”

Two last words, to Tony Keady, their 1988 All-Ireland winner who died last month, and to Niall Donohue, Cooney’s former team-mate who took his own life in 2013: “They gave us an extra boost,” he said, “I’m sure they were looking down.”

The myth and the truth one and the same.