Walsh Cup round-up: Dublin have 14 points to spare on Antrim 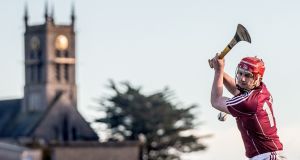 New manager Micheál Donoghue was delighted with Galway’s “attitude and application” as the Tribesmen secured a Walsh Cup win over DCU at Duggan Park, Ballinasloe.

Joe Canning’s splendid 16th-minute goal ensured Galway departed at the break armed with a 1-6 to 0-4 lead.

Galway’s David Burke was sent off on the stroke of half-time for a second bookable offence, but the locals held on after the restart to secure victory.

Danny Sutcliffe, who recently departed from the Dublin panel, was prominent for the Students, who contributed to a decent encounter.

“We are really satisfied with the lads attitude and application,” Donoghue commented.

“There is going to be a lot of work in the next two or three weeks, but it is work we are all willing to do.”

After impressing sporadically in the first-half, the Dubs assumed complete control upon the restart, confirming their win through second-half goals by Eamonn Dillon and Seán Reilly.

The hosts were handed a perfect start with Paul Ryan firing low past Chris O’Connell in the fourth minute, although Antrim responded well to hit back through points from Eddie McCloskey and Kevin McKernan.

That momentum was maintained as McCloskey capitalised on defensive hesitancy to fire home in the 21st minute with Dublin regaining their lead soon after following scores from Chris Crummey and Ryan.

The remainder of the half was similarly tight with Liam Watson and McKernan chipping in with points for Antrim while two late frees by Ryan inched Dublin 1-11 to 1-10 ahead at the interval.

With the winds at their back upon the restart, Dublin gained control thanks to early scores by Crummey and the excellent Niall McMorrow before Dillon scored a goal that his overall play merited in the 46th minute.

It proved a procession from that point with McMorrow and Liam Rushe to the fore and it was only a matter of time before Dublin’s third goal arrived with Dillon teeing up substitute Seán Reilly for a facile finish.

The competitive nature of the contest petered out from that juncture with Ryan and Reilly tagging on points to complete the straightforward success.

Subs: CJ McGourty for K McKernan and D Nugent for Black (both 46 mins), D McKernan for Clarke (52 mins), G McTaggart for O’Connell and G Walsh for McFall ( both 67 mins).

Goals in both halves from IT Carlow full forward Jack Fagan and right full forward Martin Kavanagh proved the crucial scores as the students deservedly prevailed over Carlow at Netwatch Cullen Park.

Carlow led 0-4 to 0-2 after 15 minutes play but with Laois senior players Stephen Maher and Charles Dwyer impressive in the IT half forward line, they took control and Fagan’s goal on 21 minutes put them into a 1-4 to 0-4 lead. By half time the IT lead had extended to six points (1-10 to 0-7).

Although Ger Coady had a Carlow point eight minutes into the second half there was an immediate response from the students as Martin Kavanagh, ironically an established Carlow county player lining out for his college, shot his side’s second goal.

In the 64th minute Carlow created their best goaling chance when substitute Ross Smithers brought a fine save out of the IT goalie Enda Rowland.