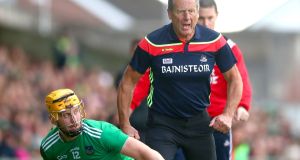 By a quirk of fate it’s more or less a year exactly since John Meyler bade farewell to intercounty management. Cork lost to Kilkenny in the All-Ireland quarter-final 12 months ago last Tuesday and Meyler pulled stumps not too long afterwards.

His subsequent opting for the quieter life of club management raised few eyebrows because he’s been preparing teams for so long at various levels and the choice of Wexford champions St Martin’s was agreeably nostalgic, taking him from Cork, where he has made his life, back to the county that he left all those years ago to attend UCC.

He’s from Tacumshane, the small village about 10 miles from Wexford town, noted for its windmill. If you want to, insert Quixotic references but Meyler has always appeared more of a nuts and bolts man and never in a long career have the technical demands of management been so elevated.

This Friday night, he takes the Martins into their first defence of the Bowe Cup in a mostly empty Wexford Park, with recent Leinster champions Oulart in the other deserted corner. By chance it will the first action of this year’s long-delayed resumption to go out on live television.

So, the round-robin match that starts off Group A of the Pettits Super Valu county championship will oddly have a national audience whatever about an attendance.

Meyler says that doesn’t bother him at all. When he’s on the line he’s not paying attention to the crowd. He’ll be glad simply to engage in competitive action but getting a team ready in a time of pandemic has been complicated.

“It’s a whole management structure in the club from the chairman down,” he explains. “He manages and implements the Covid regulations and response. Cian Ó Lionáin has been really good on the RRP (rules, regulations and procedures) along with the secretary. Players are now turning up for training in their gear, getting straight onto the park and doing the session.

“There’s no chit chat, no masseurs, no meetings. The minute training’s over, they get into their cars and go home. We played a challenge match last week against Ballygunner. Lads are togging off outside and the bags just go into a room and you pick them up when you’re going. There’s no showers, no banter when the match is over.”

Training is therefore drills and physical conditioning – all under the Orwellian surveillance of the GPS units, feeding data back to those interested – but there’s no interaction beyond that, no encouraging one-on-ones. That communication has now become the preserve of what would have sounded like science fiction when Meyler started out on the hurling road.

“You’re using Skype, Zoom and the social media tools. You can go home after a match, summarise it and put the notes up on WhatsApp for the whole team group. You can Skype a fella individually and say you were happy with a, b, c but there’s work needed on d.

“Technology is making up for the five-minute chat you’d have with a fella in the car park. Young fellas are so much more tech savvy and they read the stuff and maybe it sticks better.

“It’s more complicated with groups but you can use Zoom meetings with the defence and attack as groups and say what we need to work on.”

Focus this week has been on the danger of Covid-19 infections, which have visited certain clubs, although not through their games activities, and the restrictions on spectators.

Assuming a clean bill of health and a focused indifference to the size of the crowd, there’s still plenty of new things to get used to like the water breaks introduced between the 15th and 20th minutes so players can rehydrate without sharing water bottles. They sound like military operations.

“Management is really detailed as well. This might sound silly but you’re dealing with the kitman because there are no water carriers allowed on the line. That break after 15 minutes or so is critical. You might get a minute or two with your players on the line but the logistics guy has to be tuned in.

“Is the water ready? Have I got everyone’s bottle? There have to be 15 different bottles clearly marked with numbers and names and given quickly to the players. Guys might be at the far end of the field when the break is called but they need to be tuned in as to when the break might be coming.”

These breaks have essentially become like time-outs, gifting a precious review opportunity to the manager but brevity is advisable.

“It’s a challenge for the manager to get the point across in 30 or 60 seconds but it’s also an opportunity that we don’t normally get. It’s made me think about whether the GAA might be better off going to four quarters. It gets rid of all these runners et cetera, who are often just in the way of the game when jumping in and out. It’s an opportunity for the GAA going forward.

“In the challenge matches the break was brilliant, particularly if you’re going wrong and need to rectify something. I know if you’re going well you might lose momentum but overall it’s useful to have that short space of time.

“You’re only going to get one point across so you need to prepare it when the break is approaching.”

Is it all a bit strange – the new abnormal?