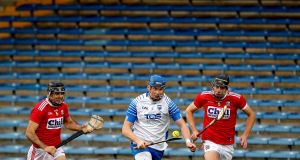 Waterford’s Austin Gleeson gets away from Cork’s Christopher Joyce and Robert Downey during the Munster SHC semi-final at Semple Stadium. Photograph: Ryan Byrne/Inpho

It had been four and a half years since Waterford had won a Munster championship game before Saturday’s victory over Cork, but manager Liam Cahill was keen to ensure that the focus was directed forward rather than backwards.

Apart from a brief spell at the start, the Déise led all the way in Thurles and they were six clear before a Patrick Horgan goal deep in injury time gave Cork the briefest hope. Waterford finished the job though and Cahill is pleased to have a final to prepare for.

“It was really about the now and concentrating on beating that Cork team on the field of play,” he said. “These fellas have been questioned in the past, they might have used it as private motivation but we’re just looking forward now.”

The key score was the Waterford goal by Calum Lyons four minutes into the second half. The gap at the time was three points, as it had been at half-time but Waterford added two points immediately after the green flag and didn’t look like loosening their grip.

“For either team, whoever got a good start to the second half, or got a goal, it was going to be vital,” Cahill said, “so his goal was great to give us a sense of belief we could see it out.

“Our objective is always to keep the scoreboard ticking over, and it cuts into the clock and gives you that belief. Credit to the players but we have to prepare now for a Munster final.”

Four straight points coming up to the first-half water break had put Waterford into a lead they wouldn’t relinquish. A trio of Stephen Bennett frees had them 0-14 to 0-8 ahead at one stage before Cork responded with points from Shane Kingston, Mark Coleman and Patrick Horgan helping them to within three by the break.

The goal, just reward for a superb performance by Lyons at wing-back, alongside the equally effective Tadhg de Búrca, was transformative though, with Jack Prendergast and Bennett easing them eight clear.

Cork couldn’t get within four points after that, with debutant Dessie Hutchinson and midfielder Jamie Barron making important attacking interventions for the Déise.

Bennett continued to sling over frees and they outscored Cork by 0-4 to 0-1 in the final 11 minutes of normal time to lead by 1-27 to 0-23 as the 70-minute mark passed. A point from Cork sub Declan Dalton was followed by Horgan’s goal from a free, but Waterford sub Patrick Curran made sure of the win.

They move on to the final, while Cork must negotiate the qualifiers, with manager Kieran Kingston looking for a big improvement.

“We are better than we showed today, no doubt about that,” he said.

“And being three down playing into the breeze, we would have taken that before the game. The goal came at the wrong time for us, it came at the right time for them. We would have liked to have got that break at the other end. And I think, when that happened, they were able to sit back that bit more and invite us on them and they did that.”