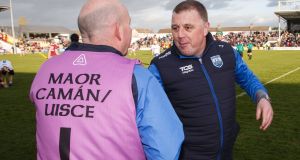 Waterford ’s Páraic Fanning after his side’s victory over Galway in the league semi-final at Nowlan Park. Photograph: Tommy Dickson/Inpho

In the day or two that followed Waterford’s win over Galway on March 10th, all anyone wanted to talk about was Jamie Barron’s point from Shane Bennett’s feather-tapped sideline ball fake-out.

In a league game where both teams were through to the quarter-finals regardless of the result, it was about the only thing about the afternoon with any shelf-life. The sheer chutzpah involved, the pure, bite-sized social media perfection of it, everything went into the mix.

For Páraic Fanning, it was a small thing and a big thing. He’s not big on taking credit for the idea but Barron himself has already said he came up with it and pushed them to try it. Put it to him though that it was a bit wasted on a dead-rubber league game in early March and Fanning won’t hear of it.

“Ah no. The best thing about that, to me, is that it encourages the lads to try other things. The opportunity was there and the lads took it. People say you should have kept it for the summer but sure it might have got blown up in the summer.

“When you’re in there at training and you’re trying to change little things here and there, it’s a great thing to be able to come back in after a game and go, ‘Jesus, that worked. Great – has anyone got something different we can try the next day?’

“You can put things off in life and you might never do them. It happened that the lads saw the opportunity and it came off. Other things didn’t come off and so be it. The important thing is that it gives the lads encouragement to keep trying things.”

The very fact that Bennett and Barron did it in a game – and only Fanning’s fifth since taking over from Derek McGrath at the end of last year – is surely telling. Plenty of coaches talk about giving players the freedom to express themselves, often protesting just a little too much about the latitude they allow. The one thing you can say about Barron and Bennett is that they weren’t worried about getting a flea in their ear back in the dressing room if it hadn’t come off.

“No, absolutely not,” says Fanning. “I always encourage them to try things. Always. If things go wrong on the field because of things we worked on or stuff we’re trying to implement and it goes belly-up, that’s my fault. If the lads try a thing and it doesn’t come off, so be it.

“We’ve worked on stuff, we’ve tried things and you have to encourage them to do it in games. Some days, they’ll come off, as it did that day. We’ve tried others that didn’t. And we might look silly at times but we can live with that. That’s par for the course. But it’s the only way we’re going to find out if things are working, actually trying them.

“I don’t think I’ve been in a dressing room before with such a tight group. As lads, they’re very easy to work with. They’re ambitious, they set the bar very high. I am demanding of them but they’re equally demanding of us as a management team. that can only stand us all in good stead. They have expectations and desires to do something as hurlers. That’s the big thing for us. They’re ambitious and they’re willing to try things as well, which is fantastic.”

If there are echoes in there of the player-centred ethos built by Derek McGrath before him, it’s not deliberate by Fanning but it’s not not deliberate either. Waterford had a bad year in 2018, winning just two games out of 10 in league and championship. But by no measure was Fanning walking into a situation where the previous management had lost the dressing room.

Quite the opposite, if anything. McGrath’s five seasons over the team had been emotional throughout, taking them from the depths of massive hidings in the 2014 league to a league title a year later and an All-Ireland final in 2018.

More than that, he steered a chunk of them from late adolescence to their mid-20s and with others he had going all the way back to their schooldays. He didn’t just manage them, he was bound up in them and they in him.

In that scenario, the next man in is likely to have some mileage to make up. Fanning says he was never daunted by the idea of replacing McGrath but he couldn’t – and wouldn’t – ignore the significance of it either.

“Everybody is aware, nationally and in Waterford, of the kind of group dynamic that Derek had there and the bond they had with him and with each other. But I wouldn’t say I was daunted going in, no. I would trust myself.

“I’ve been around long enough in Fitzgibbon dressing rooms and inter-county dressing rooms. I’d be quite comfortable in that environment and I would believe in myself a little bit too, in that I would feel I could get a response from the lads. All they want is for you to put the right framework and structure in place to do that.

“I knew plenty of them going in anyway. I would have been there with Davy [Fitzgerald] in 2010 when a few of them came onto the panel first and I’m local, I’m from the city, so I know plenty of them anyway. I’d have had some of them through the college as well. So it wasn’t a case of coming in and having to get a feel for them or anything like that. I had a lot of things in my favour.

“And to be fair, the lads were very open to new thinking too. That’s a credit to Derek and the way he had set things up. They were open to change. What was this about? It was about Waterford. And they’re able to see that as well. So no, look, I wanted to take on the challenge anyway regardless of whether it was daunting or not. It was something I wanted to do and that was very important to me as well. I really wanted the job.”

Inadvertently, McGrath handed him the perfect introduction to the gig with Waterford’s relegation from Division 1A last year. The fixtures couldn’t have fallen better for Fanning if he’d been given a pen and paper and been told to draw them up himself. Offaly, then Laois, then Carlow to start. Then the Dubs in Parnell Park right when they needed to kick up a gear ahead of that final-day visit of Galway to Walsh Park.

Fair to say they made full use of it. Waterford ended the group stage as comfortably the highest scorers in the league, their 14-98 total putting them 25 points clear of Galway and 31 ahead of Limerick. Over the past five seasons of league hurling, only Galway and Limerick in 2017 scored more in group stage hurling.

Granted, it was Division 1B but it wasn’t just a case of filling their boots against the lower orders. They put up 4-15 against Dublin and 1-18 against Galway before running up 0-31 against Clare in the quarter-final. Another 1-18 last Sunday accounted for Galway second time around.

Most pleasing of all for Fanning is the fact that they did it without ever having a fat deck to deal from. Waterford have had a rotten time with injuries, stretching all the way back to last summer. Darragh Fives, Shane Fives, Conor Gleeson, Kieran Bennett, Brian O’Halloran, Paddy Curran and Maurice Shanahan have all been out for the spring campaign. Tadhg de Búrca only got back for his first start last Sunday. Fanning has been making do and mending to a certain extent from Day One.

I'm very happy with the depth we've added to the panel

“It wasn’t ideal. We were missing players at the start of the campaign that I would have wanted in the team so that we could start embedding certain things. But look, it’s worked out well in the end. The lads who came in were playing well and it gave the lads coming back something to shoot for. I would have preferred to have everybody back earlier – I would prefer to have everybody back now, even, which we don’t have.

“I think we’re still missing more than anybody. There was one week there where I went through it and we were missing 15 lads who played championship in the last couple of years. It’s getting less and less as we go on but even so, we have six backs who all played championship last year who are still out.

“So that’s a big thing for us. It’s unfortunate for those lads, they’d love to be playing. But I don’t worry about it too much. I’m very happy with the depth we’ve added to the panel.”

Sunday is a big swing, then. A shot to nothing. Waterford have three league titles to their name and they’d sing long into the night if they were able to bring a fourth back home with them, especially against the acknowledged best team in the country, especially in Croke Park.

But if they don’t – and they mightn’t, obviously enough – Fanning will be happy that they’ve mined the league for plenty of its gold already. This early into the gig, he couldn’t have asked for a lot more.

Bryson DeChambeau motors home with 65 to win in Detroit 23:52
Barcelona put a tough week behind them to keep Real Madrid in their sights 23:37
Here is your handy guide to sport on television this week 21:45
Che Adams chooses the perfect time to open Southampton account 21:36
IRFU in line for €75m windfall as CVC acquire 14.5% Six Nations stake 21:53
Crossword Get access to over 6,000 interactive crosswords