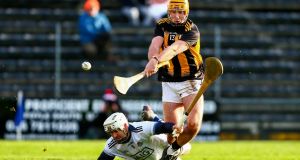 If there is to be an ambush, it will have to come in summertime. As far as this opening skirmish of the Allianz League was concerned, Kilkenny’s might – even with only six players from the starting team of last year’s All-Ireland final – proved overpowering for a Dublin team who, despite playing with a numerical advantage for the majority of the match, were out-manoeuvred at every turn.

When, in the 27th minute, Kilkenny wing-forward Richie Leahy was given a straight red card for a high contact on Danny Sutcliffe, it seemed that – finally – Dublin would find a way to get into the game. At that point, Kilkenny led 2-6 to 0-6. A chink of light for the visitors? Not a bit of it. Kilkenny kept doing what Kilkenny do and, by the end, cruised to a 12-points winning margin that revealed the ever-growing depth of Brian Cody’s squad.

“The panel is there. It is up to everyone to fight for their place. We won’t be picking the team based on anyone’s form from last year. When fellows get an opportunity to show what they can do thet have to grab it. Then someone else has to come back and try and grab it back from them,” said Cody, into his 22nd year of management, of a philosophy that rarely changed through all those times.

Dublin’s lack of a go-to goalscorer remains an issue, their plight only magnified by the sharpshooter instincts of those in black and amber stripes: Kilkenny’s opening goal came in the 12th minute when Ger Aylward, his way seemingly blocked by Eoin O’Donnell, unleashed a shot that whizzed by the full-back and somehow found a way into the net between Alan Nolan and the upright; and the second goal came in the 22nd minute when an under-hit Cian O’Callaghan handpass was snatched on by Billy Ryan who then showcased his predatory instincts.

As the home supporters in a crowd of 5,605 were savouring Ryan’s finishing, their sense of jubilation was short-lived. Leahy’s dismissal, it seemed, gave Dublin an opportunity to perhaps gain a foothold and, having gone in 2-10 to 0-10 at the break, two quick points on the restart – from Seán Moran and Eamon Dillon – hinted at a comeback. It was not to be, and Kilkenny, sharper and quicker to the breakdown all over the pitch, took a grip that grew stronger and stronger.

Dublin didn’t exactly help themselves: their use of the extra man – Crummy for a time, Jake Malone when brought on at half-time – failed to stem the wave of Kilkenny attacks and there was a sloppiness in clearing their lines, exemplified by Kilkenny’s third goal in the 61st minute when Ryan lost a couple of markers and then saw his shot half-blocked by Nolan and then squirm over the line as defender Paddy Smyth arrived a nano second too late in his attempt to rescue matters.

The one goal chance in the entire match that came Dublin’s way fell to Oisín O’Rorke but there was an inevitably about the outcome, as his shot was well-saved by Kilkenny goalkeeper Eoin Murphy. Dillon did manage to get a point out of it all to reduce the deficit at the time to five points. Kilkenny’s response? Well, that would be the run of three unanswered points, including a superb long-range effort from Paddy Deegan, just reward for his brilliant work in defence throughout, before that Ryan goal confirmed the home team’s utter dominance.

“We did well, we did well. There is not a point in saying otherwise. We are very, very happy going away after that performance,” admitted Cody, adding: “We will take it match by match. The object is to try and win every match. Will that happen? Who knows? Every team will be trying to do the same thing. This is the first game in the league. It is the end of January. A lot of things can happen yet.”

Kilkenny and Dublin are due to meet in the Leinster Championship and that, according to Cody, will be a different matter entirely. “Come the first round of the championship in May in Parnell Park neither team will look upon this game as having any relevance. A lot of water will flow under the bridge between now and then,” said Cody.

Dublin will need to undergo major improvement. Nobody needed to tell Mattie Kenny. “(We) were a bit flat there today and little bit heavy-legged, just a few percent off it . . . . Kilkenny just drove it on and their general sharpness and hunger and desire was that step ahead,” conceded Kenny.

For Kilkenny, with a whole host of big names yet to return, and with the three All-Ireland club trophies shown to the crowd at half-time, the league is up and running and hinting of further silverware in the year ahead.