Johnny Glynn suggests his Galway hurling career is over 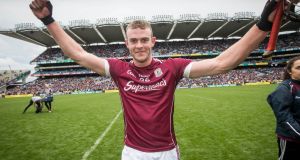 Liam MacCarthy Cup-winning Galway forward Johnny Glynn has admitted that his hurling career could be over in his mid-20s.

The New York-based attacker, just 26, lined out for the Tribesmen in last June’s Championship loss to Dublin before agreeing to a selector’s role with new Exiles football boss Gerry Fox over winter.

Galway manager Shane O’Neill hadn’t ruled the four-time All-Ireland finalist out of his summer plans but the player himself has now dashed those hopes, admitting he’s content to ‘have that chapter done’.

Speaking to The Long Hall podcast, powerful Glynn said he was ‘letting that ship sail’ when asked about Galway and said he’s fully committed to developing the New York footballers over the coming years.

“To be honest, we were kind of letting that ship sail because between the visas...now I’m in the process of getting my green card, so between leaving the country and getting back in, it would be a bit of a hassle,” said Glynn of his Galway situation. “I was kind of happy enough to say, ‘I have that chapter done’. But sure look, you never know what’s going to happen down the line. If things were to be like this for six to nine months, there mightn’t even be a Championship back home, you don’t know.”

Towering Glynn, who stands six-foot-five and weighed in at 15-stone-seven for the 2018 All-Ireland final against Limerick, has been based in New York since 2015.

He played for the New York footballers in 2016 before commuting back and forth to hurl for Galway between 2017 and 2019.

He last featured for Galway against Dublin last summer when the Tribesmen were beaten at Parnell Park and crashed out of the Championship.

The Covid-19 crisis has gripped New York more recently and Glynn revealed that he tested positive though escaped with only minor symptoms.

“It was just a bad flu for me,” he said. “Only for I knew I was in contact with someone who was positive, I probably would have thought it was just a flu. It didn’t hit me in any way different. Then you’re hearing the horror stories where it’s hitting people really bad. That’s where it’s a danger, the danger is me thinking I’m sound and going down and giving it to someone.”

Glynn said that New York had been preparing well for their Connacht SFC clash with Galway, a game that is now in limbo after being postponed.

He was optimistic that even if they’d lost to his native county that they’d be included in the new Tailteann Cup.

That would be a historic development and Glynn said he hasn’t given up on it happening, if the new Tier 2 competition does go ahead.

“It wasn’t dead in the water,” he said. “I think it was supposed to be the 28th of March where there was going to be a meeting (about it), we’d have found out then.

“The feedback we were getting, obviously we weren’t canvassing, but you were trying to see what was (happening) on the ground back in Ireland, just so you’d have an idea, and there were an awful lot of people back there that were for it so I’m guessing it would have went to a vote. When it comes to the politics side of things, I don’t know the ins and outs but there was still a chance. As of a couple of weeks ago, there was still a chance.”

The plan was for teams that finish in either Division 3 or 4 in the Allianz League to be rerouted to the new Tailteann Cup, unless they reach their provincial final.

“We wanted to get into it because we wanted to be able to play the likes of the bottom division teams, Wicklow, Leitrim, teams that we’d feel we’d have no problem taking on,” he said.