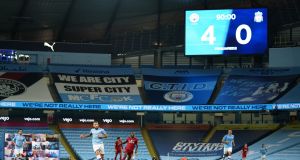 It’s Friday morning and in the latest edition of our Best of Times series Gerry Thornley has looked back to Ireland’s famous Grand Slam victory in 2009, when a 17-15 win over Wales at the Millennium Stadium saw a 61-year drought come to an end. The 2009 Six Nations proved the defining moment for Ireland’s Golden Generation, as well as providing the catalyst for the success Irish rugby has since seen at international and provincial level. He writes: “Across the water especially, and to a lesser extent both at home and further afield, you always felt that Irish rugby was still sneered at a little. But not after that, and thereafter all changed.” Meanwhile in the latest entry into his lockdown diary, Andrew Porter has written about “contactless contact sessions,” as Leinster feel their way back into training at UCD. “To be honest, training in lockdown seemed tougher, perhaps because you were doing it in on your own and it involved plenty of running and weights,” he writes. “At least now we have a ball, as well as teammates, to distract us from the fitness demands.”

Meanwhile dethroned champions Manchester City thrashed Liverpool 4-0 at the Etihad last night. Kevin De Bruyne opened the scoring before Raheem Sterling, Phil Foden and an Alex Oxlade-Chamberlain own goal steered Pep Guardiola’s side to a comfortable victory. Earlier Sheffield United got their bid for a European place back on track with a 3-1 win over a beleaguered Tottenham Hotspur at Bramall Lane. Victory moved the Blades back up to seventh with Jose Mourinho’s side still languishing in ninth.

1 Coronavirus: 50 new cases as Glynn says phase four delay disappointing for many
2 Gardaí surrender 13 people to Polish police
3 ‘I wandered around Dublin wondering: Is this what they call a capital city?’
4 Fresh investigation into the murder of Michaela McAreavey in Mauritius
5 Funeral of John Hume hears peacemaker ‘gave dignity and life to so many people’
6 NPHET calls for ban on non-essential travel from countries with high Covid-19 rates
7 Irish in Canary Islands: Life has changed dramatically
8 Ford Kuga: Impressive plug-in hybrid SUV underlines motor giant’s renaissance
9 ‘I’m lucky to be alive’: Irish citizens describe Beirut explosion
10 Boy’s treatment by school over alleged thefts was ‘unbelievable’, judge says
11 Italy threatens Ryanair with flight ban for alleged Covid-19 violations
12 ‘My mother is a controlling, manipulative, narcissistic person'
13 Irishman in Malta postpones trip to Dublin after green list cut
14 Restaurateurs say new 11pm closing time is ‘a body blow’ to sector
15 Shooting soldiers in a handball alley: Amelia Stein’s The Bloods
16 ‘This was like a nuclear bomb’: More than 2,700 injured in Beirut explosion
17 Ryanair and State agree accelerated hearing of challenge to travel restrictions
18 ‘There were times I had to step outside to hide my tears, take deep breaths and then carry on’
19 Donohoe does not commit to specific compensation for pubs
20 In Oz, Marianne would have told Connell: ‘Get stuffed, you gutless wonder’
21 BofI to cut 1,400 jobs as Covid-19 drives €937m loans charge
22 Coronavirus punches €8.3bn hole in public finances
23 Ireland needs to move to ‘zero-Covid’ policy to avoid catastrophe, scientists say
24 When Covid subsided, Israel reopened its schools. It didn’t go well
25 Trumpism may be dying but is still dangerous
26 Five of the best foundations to try as the world comes back to life
27 Hume brought to Derry as candles in windows light his way
28 ‘Pat Hume did so much...Derry people know that, and remember that’
29 Beirut explosion: At least 135 killed as investigations blame negligence
30 John Hume obituary: Nationalist leader who championed ‘agreed Ireland’
31 Cool, dull July as Co Kerry recorded wettest day since 1940
32 How safe is it to go back to the office?
33 Two former solicitors remanded on bail after being charged with fraud offence
34 Is Cameron Diaz’s ‘clean’ wine as revolutionary as she thinks?
35 Social worker overcomes poverty to graduate with master’s degree
36 Review of €15bn high-speed rail line linking Dublin, Belfast, Cork
37 Covid-19: Even though now the trend is upward, it isn’t all bad news
38 The breaking point in Belarus has been made flesh in Svetlana Tikhanovsky
39 Sacrificing pubs for schools: Ireland’s latest Covid trade-off
40 Man charged with murder of woman (20) in Newry
Real news has value SUBSCRIBE