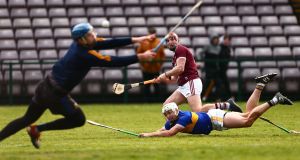 It’s a knock-out. The third Galway goal came with five minutes remaining, brilliantly whipped in by Cathal Mannion just as the vicious wind whipped up more dark clouds off the Atlantic and promptly dumped buckets of rain on Pearse Stadium. White heat of championship hurling this was definitely not.

It wasn’t quite the Storm Dennis status that forced the postponement of this game three weeks ago, but such conditions did help contribute to the 16-point turnaround, Galway trailing Tipperary by eight points shortly before the break, before finishing off with an eight-point victory. Still no easy feat whatever the weather.

The winning prize for Galway is a league quarter-final against Wexford next Sunday (the venue decided by the toss), Tipperary’s prize for losing being the nine-week break before their first championship match down in Waterford. Given that break begins on Monday morning with five days of warm-weather training in Spain there may be some consolation in their too.

Either way Galway manager Shane O’Neill was by far the more satisfied, and for good reason. They’d gifted Tipp a goal after three minutes and yet were the better team throughout, even if it took them the second half to realise that. Conor Whelan hit two goals, his second on 57 minutes putting them in front for the first time, the excellent free-taking of Evan Niland (he finished with 0-14, all but one from placed balls) and four super points from Brian Concannon helped to close out the deal.

“It came down to what we were looking at over the last number of weeks, and that’s work rate,” said O’Neill. “That was unreal, particularly in the second half. I actually thought we were the better side in the first half too, conceded a goal straight off, we just tuned out a bit. But our goals were taken brilliantly in the second half.

“We didn’t have a target, as such, with the league, just said we’d see how we were going, from game to game, create that competitive squad for the championship. We’d a lot of niggles and injuries too, so we’ll have to see where a few players stand, but you can’t beat competitive matches. We have our own metrics and work-rate to measure, and at the moment we are getting there. I think in the 50-50 balls we made it extremely difficult for them to come out with the ball.”

Liam Sheedy admitted as much: the All-Ireland winning manager may take further consolation in the fact their league ended just a week later last year, and that didn’t do them any hard, but there’s no denying that something isn’t clicking yet.

“I thought we were playing reasonably well, the third goal certainly worked very well, but once Galway came at us, I must say, they killed us in the middle third in the second half,” explained Sheedy. “It was very hard for our lads to defend the ball, and if you look back on it, we probably didn’t win any position in that second half. We were completely out-played. The weather was coming at us too, and we just couldn’t find the answers.

“But you’d rather have that problem in early March. There is a lot of character in that dressing room, they’ll be hurting this evening, but we have a lot of work to do. It’s all that about preparation now.”

They played the first half hour in bright sunshine, before the weather turned and gave everyone a reminder the championship is some way off. Galway will need at least nine weeks to dry out. For Tipperary that period will include another question – Sheedy raising that one unprompted.

“Our record, when we do go and win Liam MacCarthy, isn’t good in terms of winning it back again, getting back up to the required level, so we have a lot of work to do, and I’ll be very confident this team can do the work that is required. That performance we gave in the second half is not at that level, very, very average. So yeah, we haven’t found our form in this league, that’s fair to say. But full credit to Galway, they struck the decisive scores, of the highest order. But we learned a lot today, and have loads to work on.”

John McGrath waltzed in for Tipperary’s opening goal on three minutes, and added his second on 21 minutes when he bounced on a short free from Jason Forde. Their third goal on 35 minutes was a work of beauty: Seamus Callanan passed back to Cian Darcy just inside the 45, who then promptly spotted Forde in space closer to goal, delivering an inch-perfect pass for Forde to rattle the net.

It briefly pushed their advantage out to eight points, before Niland stole one back, Tipp up 3-7 to Galway’s 0-9: would it be enough as they turned their faces to the reckless Atlantic wind?

The Galway contingent in the crowd of 5,750 soon got behind their team as much as the wind did, Niland nailing six more frees in the second half, Conor Cooney, Johnny Coen and Jason Flynn getting in on the scoring act too, and with Sean Loftus and Daithi Burke brought into the defence things improved considerably in that end too.

Joe Canning is unlikely to be back for next Sunday, still nursing a calf strain, but Galway are certainly going in the right direction. As a parting question Sheedy was asked had he any fear of Covid-19 as he took his team into a sort of self-isolated training camp next week.

“Lads, come on,” he said Sheedy. “I don’t know exactly what Jurgen Klopp said about that, but you can use his answer.”

Dates, times and venues to be confirmed by CCCC.