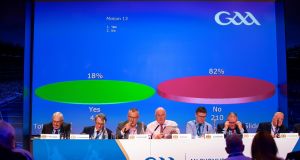 Motion 13 is defeated 82 per cent to 18 per cent at GAA Congress. Photo: Tom O’Hanlon/Inpho

At Saturday’s session of the GAA’s annual congress at Croke Park, delegates have decided overwhelmingly to reject the introduction of the black card and sin bin into hurling. The proposal was defeated by 210-46.

David Hassan, chair of the Standing Committee on the Playing Rules, was again acquainted with the limitations of researched, evidence-based arguments when his blunt warning that not to confront cynical play in hurling would effectively be to endorse it.

Having analysed 20 high-profile hurling matches between 2017 and 2019, it was found that 48 per cent of fouls involved ‘cynical or disruptive’ conduct.

“The presence of cynical fouling in hurling is well accepted,” he told congress. “Knowing that and consciously deciding to do nothing is contradictory. Central Council asked, ‘what sort of games do we want?’ and embraced seven principles. I’d bring delegates’ attention to these two: one, that it shouldn’t pay to foul and two, that we should reward skilful players.

“I accept that there is a spectrum of opinion on this but we should conflate what people want with what the game needs.”

A series of emotive responses followed.

Antrim chair Ciarán McCavana said that the idea of a black card in hurling was “as welcome in Antrim as Joe Brolly on The Sunday Game. We have a great game played in a sporting way and shouldn’t try to fix what isn’t broken.”

Jimmy Walsh, chair of Kilkenny, added: “The contest of 15 against 15 is what makes hurling great. I ask the delegates to let the players play and let us privileged spectators enjoy this great sport as a spectacle.”

Former president Seán Kelly also opposed, by citing ambivalence about the black card in football. “We should be slow to introduce something to hurling that isn’t 100 per cent satisfactory in football at the minute. We should take into account the views of the players.”

Séamus Hickey of the Gaelic Players Association said that whereas the GPA respected the work of Hassan and his committee, inter-county players were emphatically opposed to the proposal.

Other proposals from the SCPR fared better. The tidying up of the advance mark by qualifying the entitlement to take four steps without being challenged if a player plays on, which applies to the centrefield mark, was easily passed.

So a player taking an attacking mark in either of the rectangles may be challenged immediately if he decides to play on – as opposed to being able to take four steps.

Hassan said that the situation hadn’t arisen as an issue when trialled but accepted that for an attacker to be immune from tackling for four steps with the rectangles would be “impractical”.

A couple of ideas originating in clubs were heavily defeated. Hollywood in Wicklow proposed that a sideline cut in hurling be worth two points. This was opposed by Conor Denieffe, Kilkenny secretary who argued that whereas he agreed with proposer Martin Fitzgerald that hurling was “the greatest sport in the world,

“The sideline cut is only one of many skills in the game and one that is entirely unchallenged.” He was supported by Galway chair Pat Kearney.

As might be expected of any hurling contest that pitted Galway and Kilkenny against Wicklow, the outcome was emphatic, 57-190.

St Ita’s in Cork proposed that All-Ireland semi-finals should require replays rather than extra time but Connacht CEO John Prenty opposed, saying that fixtures had been such a consistent issue for the GAA that “certainty” was required and “we can’t have certainty if we add more games”.