Eoin Cody impresses as Kilkenny put Laois to the sword 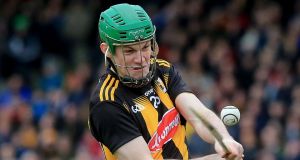 Kilkenny continued their pursuit for league honours with a commanding victory over a Laois side that showed flashes of putting it up the defeated All-Ireland finalists but ultimately fell quite a distance short.

Laois looked like they had an upset in them in the early stages of the second half, notching the first four points with the wind behind their backs.

But Kilkenny and in-particular Eoin Cody had other plans - the Ballyhale youngster coming to the fore for the Cats to hit 1-5 in a five-minute spell to put the result beyond all doubt.

Laois’ status in Division 1B was confirmed for another year following their win against Carlow last weekend and with the knockout stages out of their reach, there was little to play for them in this encounter. And they were forced to cough up home advantage due to an overworked surface in Portlaoise, allowing for a dress rehearsal for their Leinster Championship meeting later this summer.

Kilkenny attacked at will and the scores came easily for Brian Cody’s men against a Laois defence that struggled to stop the onslaught. The home side went on to hit seven of the next 10 points to pull clear by the 20th minute, the highlight of the scoring a brilliant point from their vice-captain Willie Dunphy.

The half ended in hectic fashion when Alan Murphy goaled on the stroke of half-time, but Laois went up the other end and earned a penalty that Rowland came forward to confidently dispatch and give the O’Moore men a lifeline going in at the interval.

“Just after half-time, to get the start we got, that should’ve really catapulted us into that match,” said Laois manager Eddie Brennan after the game.

“But the one thing we know at this stage is that when you come to Nowlan Park, the one area you have to be really strong in is the work-rate, the tackle and the honesty. That was probably the difference out there on a day like today.”

Aside from the initial Laois scoring spree, they rarely troubled Kilkenny in the closing half. Eoin Cody took over the free-taking duties for the half and Henry Shefflin’s nephew gave a coming-of-age performance at Nowlan Park.

The game fizzled out in the final quarter and with little doubt as to the final result, Laois outscored their opponents 0-6 to 0-2 in the final stretch with the menacing King accounting for three and Eoin Gaughan adding a brace to bring their national league campaign to a close, while Kilkenny march on in search of silverware.