Mattie Kenny delighted with his side’s performance after Kilkenny defeat 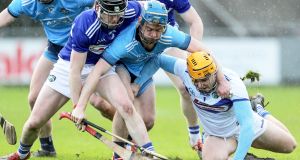 For those arriving in Donnycarney expecting another afternoon of Sturm und Drang between these two, seven months after their barnstorming tussle in Portlaoise, they will have left a little disappointed and perhaps with their expectations reduced ahead of the rematch this summer.

Despite last season’s championship encounter, it could be argued that these two sides are in vastly contrasting positions. Dublin are attempting to shake off the tag of being also-rans among hurling’s heavyweights while Laois, after last season’s Joe McDonagh success, are attempting to justify their position at the very top table. After this performance, only Dublin have edged closer to their targets.

“We were a bit disappointed in our performance down in Kilkenny the last day so we were looking for a better performance today, a higher work-rate,” explained Mattie Kenny, the Dublin manager, after his side claimed their first points of the league. “In fairness to the guys they gave that in spades today.

“It was a difficult day for hurling, the breeze was blowing down the pitch, into the far corner. It was a swirling breeze and it was interesting that both teams played better against the breeze than they did with it.

“As well, do we want to win matches at this time of the year? Of course we do. But it’s all about getting the performance.”

And for this time of the year, it was a solid performance, a few gears below championship tempo, before a tame atmosphere at the North Dublin venue. The faint applause meeting both sides as the entered the arena was an early inclination that the energy brought to last season’s emotional afternoon in the O’Moore County was slowly fading from memory.

But there was enough evidence to suggest the meeting between these two this summer will produce more of the zest and spark that made their encounter among the most memorable from last season, even if those excerpts were at a premium. And yet at other stages, this had all the hallmarks of just another Walsh Cup tie, like last month’s encounter between the two which saw Dublin roar to a 14-point win.

Dublin only led by only by three points at half-time here, 1-11 to 1-8, but it could easily have been much more if not for Laois goalkeeper Enda Rowland, who produced three miraculous first-half saves.

Otherwise, this was going to be a rout from the start, Dublin manufacturing a 1-4 to 0-0 lead within the opening 10 minutes, the goal coming through Eamonn Dillon, who fetched a crossfield ball at the edge of the square before punching the sliotar past Rowland.

It was the harbinger Eddie Brennan’s side needed and by the 22nd minute they were levelling proceedings through the destructive Willie Dunphy who netted at the Collins Avenue end. It was, at the very least, a heartening comeback, with Jack Kelly and Paddy Purcell notching the pick of the Laois scores, though they couldn’t have been elated with the team performance as a whole.

By the time Dunphy netted Laois’ second goal late in the second half, Dublin were already looking forward to their trip away to Carlow. They were simply superior in too many facets of the game.

For all of the Laois goalkeeper’s first-half heroics, there was nothing he could have done about the early second-half goals afforded to Dublin. He saved a thundering shot within the opening minutes, though in saving the shot he put the ball on a platter mid-air for Oisín O’Rorke. The forward smashed the ball home. David Keogh followed it up moments later, pirouetting and smashing the sliotar home in one swift move that wouldn’t look out of place in the Bolshoi.

Despite the effectiveness of Dublin’s forward line, however, it will be the lack of energy Laois exhibited for most of the second half that will worry Brennan ahead of what is going to be a very tough season.

Dublin, in contrast, are off the mark and ready for a three-game assault on the rest of the division. That begins the weekend after next.