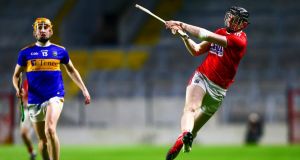 The sight of John “Bubbles” O’Dwyer being stretchered off near the end only exacerbated Tipperary’s anguish at losing for the second successive week at Páirc Uí Chaoimh on Saturday night.

He was accorded a sympathetic ovation from the near 10,000 crowd after the game was held up to treat what seemed like a neck injury.

But All-Ireland-winning manager Liam Sheedy was optimistic about his player’s condition afterwards.

“He was sitting up in the dressing room, a bit battered and bruised, but hopefully nothing more than that, maybe a small bit concussed,” he said.

It’s understood O’Dwyer was whisked away by ambulance, under a Garda escort, to hospital for a scan.

Despite the loss, Sheedy remained upbeat. “Losing won’t define this team. I’m happy with the performances – not just getting it for long enough in games at the moment.

“Overall it was a good, exciting match of tight margins, and the pitch was in fantastic condition. The crowd saw some fantastic scores.”

And many them came from Tipp, notably Padraic Maher’s three efforts from distance to supplement Paddy Cadell, Alan Flynn and John McGrath.

The game finished in a welter of excitement after Tipp keeper Brian Hogan buried a penalty four minutes from the end of regulation time to make it a one-point match.

It was awarded for a foul on Mark Kehoe by Bill Cooper after Cork keeper Patrick Collins denied Niall O’Meara with a stunning save.

Seamus Harnedy edged Cork two in front as Tipp chased a winning goal, but Collins was equal to their best efforts as Cork bounced back from the Waterford defeat.

Manager Kieran Kingston was delighted with his side’s application and the contributions of Colm Spillane and Alan Cadogan, both returning from long-term injuries.

Cadogan was outstanding in attack, scoring 0-4 from play, setting up Robbie O’Flynn for the first goal and drawing frees for skipper Patrick Horgan to convert.

Kingston provided perspective. “We’re not a bad team because of the Waterford result and not a brilliant side because of this win. “We need consistency, and that will be judged in three or four weeks’ time

“We’re happy with the effort and performance. We needed to bring it because we were welcoming the All-Ireland champions, who are some outfit,” he said.

In the first half the sides were level eight times, but Cork’s goals helped them lead by 2-13 to 0-15 at the break.

The first came in the 11th minute, O’Flynn’s shot catching Hogan by surprise, slipping inside his upright for a 1-4 to 0-5 advantage.

The second goal came in the closing act, four minutes into injury time, and O’Flynn was involved again. This time he was hauled down by Sean O’Brien for a penalty.

The respective forward lines revelled in the ideal conditions and the direct approach adopted by both teams.

Cork were noticeably far more industrious around the middle third, with O’Flynn and Cadogan impressive in their shooting.

Tipp also benefited from a route-one approach, captain Jason Forde and Mark Kehoe availing of the regular supply close to the posts.

The high tempo was maintained during a protracted second period as the rivals exchanged points with Padraic Maher nailing a beauty from distance after 43 minutes.