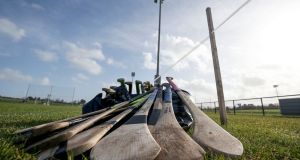 With the Kilkenny school clinging to a one point lead (0-16 to 0-15) Puirséil went on a rampaging run through the Kieran’s defence to score the game’s only goal and bring the cup to the Stillorgan college for the first time.

The sides were level a total of nine times over the course of the game, including half-time when they were tied at 0-6 apiece.

Both defences were on top and scores were hard to come by, but the Dublin school stayed in touch throughout and one could sense that the holders were in bother.

This victory was based on a fierce determination and thirst within the Coláiste Eoin side. They matched Kieran’s in every facet of the game and it was obvious that their need was greater than their opponents.

The Kieran’s forwards failed to fire on they day, presenting little or no goal-scoring threat and finding themselves pitted against a defence fully intent on defending their territory.

A highlight of the second half, apart from the splendid running game of the new champions was a superb line cut by left-half forward Pádraigh Ó Luineacáin as the game entered its final quarter, which left his side a point adrift and ready to pounce for the win