Clinical Cork bid a fitting farewell for now to ‘the Park’ 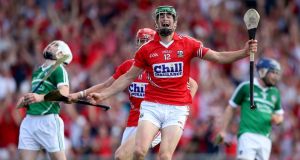 One last dance by the Lee, then, and if it wasn’t quite the hoedown the old place wanted the locals will take it all the same.

Two sides chugging alongside each other on parallel tracks for most of the day were separated in the end by a couple of switchblade goals inside 12 second-half minutes. Séamus Harnedy and Paudie O’Sullivan speared the goals that cracked the day open and when the counting was done, the electronic scoreboard at the Blackrock End glowed 2-24 to 0-24.

It meant a first Munster title since 2006 for Cork, closing off their longest stretch without one since 1966. The pre-match chatter which amounted to there being little enough between the sides but Cork having the better forwards came to pass. Limerick failed to press home their advantage when they had it, Cork succeeded when it was their turn. No point complicating the thing.

“We can talk away until the cows come home,” he said. “But let’s be honest about it, goals win games. They had one or two half-chances, Mark Ellis did brilliantly on one occasion to get across and block a shot. But then both Seamie and Paudie got two great chances and took them.

“It doesn’t worry me about the stadium, to be honest. I have no great interest in winning the last or the first at the stadium. It doesn’t worry me. I wanted to get silverware for the Cork public and supporters but particularly the team and the players who have gone through a bit with us now. It’s not down the mines or anything, but losing two finals was tough.

“I’m delighted for the players and their families, it was tough for them losing those finals last year . . so it’s great for them to have silverware. We’re looking forward now to the All-Ireland semi-final. Limerick are battle-hardened, they’ve very experienced, they came down to give it a right go and they did. The goals were the difference . . . .”

The sides were level seven times. After a couple of early wobbles from Shane Dowling, he and Patrick Horgan swapped frees all day. Alan Cadogan stitched three points from play for Cork, Graeme Mulcahy did the same for Limerick. Shane O’Neill bossed the Cork full-back line throughout, Richie McCarthy had a storming first half at the other end.

TJ Ryan’s side will gather themselves now and move on to face the winners of next Saturday’s qualifier between Wexford and Waterford. Cork have five weeks to kick around before their All-Ireland semi-final. Both sides will have their say in September’s riddle yet.

In the football championship, Mayo gathered up their fourth Connacht title in a row and by doing so matched the feat of the 1951 team. They had too much power and too much nous for a young Galway side in Castlebar, running out 3-14 to 0-16 winners and confirming their complete dominance of the province.

Lee Keegan palmed home a first-half goal after great work from Cillian O’Connor before Jason Doherty and Barry Moran matched him in the second half. The outstanding Keegan had a hand in both of their goals as well as his own, Kevin McLoughlin came up with important points in the first half when the game was still a contest. It was what James Horan has made Mayo – professional, clinical, quality.

Galway head to the qualifiers where they will meet Tipperary in a fortnight, the same day Cork play Sligo. On the other side of the qualifier draw are Armagh, surprise winners over Tyrone in Omagh yesterday and Kildare who hammered Down in Newry. Those two teams are in the draw alongside Roscommon and Clare, to be made on the Morning Ireland show on RTÉ- Radio One this morning.

1 Gerry Thornley: Wild reactions to this Ireland team as fickle as the wind
2 Dan Tuohy explains ‘rotten to the core’ comments
3 Cheltenham keeping a watching brief on coronavirus
4 Cian Healy out of remainder of Six Nations
5 R&A call for ‘common ground’ on golf’s distance debate
Real news has value SUBSCRIBE