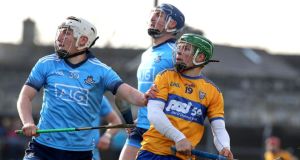 Dublin’s Andrew Dunphy and John Hetherton and Clare’s Ian Galvin watch to see if a point is scored during the Allianz Hurling League Division 1B at Cusack Park in Ennis. Photograph: Bryan Keane/Inpho

Clare 0-27 Dublin 1-15
Brian Lohan’s Clare continued their unbeaten run in Division 1B of the Allianz hurling league, beating Dublin by nine points and as a result they reached the semi-final in a fortnight’s time.

Played in front of a crowd of 3,360, this game lacked intensity and from early on appeared to be going in the way of the home side. They controlled matters for the opening half-hour though Dublin did finish out the half in positive fashion, scoring an unanswered goal and three points, to leave the sides level at the break (0-11 to 1-08).

But this purple patch was as good as it got for the Metropolitans and for most of the game they were outclassed by a dogged and more cohesive Clare outfit.

Tony Kelly, once again, gave a man of the match performance from mid-field for the Banner County and his contribution of twelve points, albeit only one from play, proved to be the undoing of Mattie Kenny’s charges. On a bitterly cold but dry day, Dublin grabbed the opening score, a Donal Burke pointed free from close to the left sideline.

He managed two more, one from play and one from a placed ball either side of a Kelly effort, in the fourth minute. Then the hosts went on a scoring spree firing over eight in a row over a period of fourteen minutes, leaving them 0-9 to 0-3 ahead by the twenty-second minute. Kelly grabbed two, as did fellow mid-fielder David McInerney and half forward Domhnall McMahon, while Shane O’Donnell and Diarmuid Ryan contributed a point a piece. Dublin replied with another Burke effort and a Paul Crummey point to keep the visitors in contention and when David McInerney shot his third of the afternoon, he pushed Clare’s lead out to 0-11 to 0-05.

Nevertheless, the Dubs finished the half in the in a good position and when Eamon Dillon’s low hard shot rattled the Clare net on thirty-five, the visitor’s hopes were on the up. The experienced substitute took advantage of poor defending by Clare corner-back Liam Corry to score the game’s only goal.

But alas, Dublin’s second half performance let them down. Clare’s good showing in the league thus far stood to them. New manager Brian Lohan has tweaked their style of play and his trying of players in new positions, seems to have paid off.

A Kelly free from the left wing proved to be the opening score of the second half with Dublin replying with a Paul Crummy effort. In essence Clare wrapped up the contest over the next ten minutes, shooting six points in succession as Dublin struggled to get to the pitch of the game.

Kelly got three of those scores and they were added to by efforts by David McInerney, substitute Aaron Shanagher and the impressive Shane O’Donnell. Opening up a 0-18 to 1-9 lead, Clare added scores at will as the contest trundled on to an inevitable conclusion.