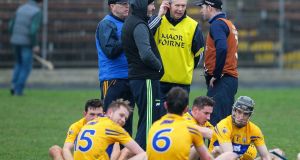 Clare maintained their interest in the Munster Senior Hurling League having staved off a late rally from a Waterford line-up at Fraher Field, whose panel featured 17 changes from Sunday’s pre-match team sheet.

But there’s no guarantee that the league champions will fulfil their next scheduled fixture in the competition, which has been set for Wednesday night against Cork, according to co-manager Donal Moloney.

“We have stated from the start that we can’t play on Wednesday night because we have a whole lot of Fitzgibbon [Cup] players and we cannot ask these players to play three senior games in one week, then play a Fitzgibbon and then play a fourth senior game against Cork,” he said.

“We’re not doing it, maybe we’ll be forced into it but that’s where we’re immediately at right now. We cannot ask some players to play five games in 10 days; Fitzgibbon is on Tuesday and we have 13 Fitzgibbon players . . and if the fixture isn’t changed, we’ll have to fight it.

“We’re not going to torture our players.”

When asked if Clare’s management might cede a walkover to Cork, Moloney replied: “Maybe.”

Co-manager Gerry O’Connor added: “We’re looking at a panel of 27 players. We’ve used those as best and as efficiently as we can for the last three games. As Donal said, if 13 of those lads are hurling a full-blooded, championship Fitzgibbon [match] on Tuesday, it’ll be very difficult for us to put out a meaningful team on Wednesday night.”

An entertaining first half saw Clare go in leading by 2-11 to 2-7, with only five of the opening half’s 22 scores coming from frees.

Waterford’s DJ Foran opened the scoring after only 44 seconds, with Eamonn Murphy doubling the hosts’ advantage a minute later.

But back came Waterford, as Peter Hogan ran onto to Jack Fagan’s pass, to coolly finish the ball into the Banner net after 14 minutes.

Moments later, Hogan had found the net again, emerging from a mass of limbs to tap the ball home from point blank range to send the Deise four points clear.

But Clare rallied, adding the game’s next three points through Bobby Duggan (a free), Peter Duggan and Aaron Cunningham to trail by a point just shy of the half-hour.

Jack Fagan restored a two-point lead for Waterford before Clare struck their opening goal in the 31st minute, as Cathal Malone finished off a move instigated by Conor O’Donnell.

Billy Nolan’s third free brought the sides level for the third time in the 32nd minute before Ben O’Gorman goaled for Clare, ably assisted by the lively Cunningham, with a Bobby Duggan free completing the first half scoring.

The second half was an altogether scrappier affair, during which Clare’s Brendan Bugler was sent off for a second bookable offence after 56 minutes.

Clare maintained their advantage despite not scoring between the 41st and 65th minutes, making those early second-half points from Jason McCarthy, Aaron Cunningham and Ben O’Gorman all the more vital.

Billy Nolan’s free-taking, and a fine Stephen Roche point kept Waterford in the contest before Conlon, who required stitches for a first half hand injury, pointed in the 65th and 67th minutes for Clare. Seamus Keating fine point and Billy O’Keeffe’s stoppage time goal left just a point separating the sides.

Three goals inside six minutes near the end of the first half put Limerick out of sight in the Munster Senior Hurling League game at the Gaelic Grounds.

Limerick went in at the break in front by 3-15 to 0-7 which left Kerry with a mountain to climb.

It was 0-10 to 0-5 after 20 minutes but once Peter Casey had the first goal on 29th minutes Limerick finished the half very strongly. Barry Nash created the second for Tom Morrissey two minutes later and and Nash got another.

Shane Nolan had two points for Kerry but Nash struck again for his second and Limerick’s fourth goal and that was it as far as the result was concered.

Seasoned campaigners Limerick brought on a few of their more season campaigners such as Ronan Lynch for the second half and he scored six points, five from frees. in the first half Peter Casey was on free taking duty and he scored 1-9 with six of the points being from frees.