Clare ease into action with 16-point thrashing of Carlow 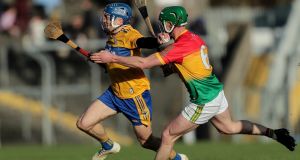 As expected Clare defeated Carlow in an opening game of the Allianz hurling league Division 1B, in front of a crowd of 2,283 at Cusack Park in Ennis on Sunday.

The home side’s new manager Brian Lohan fielded a somewhat experimental starting XV, with some of the more experienced players playing in unfamiliar positions. Nevertheless a 16-point victory was achieved to give Lohan and his backroom team a boost ahead of next weekend’s clash away to Davy Fitzgerald’s Wexford.

Inside 90 seconds, Carlow had grabbed a 0-2 to 0-1 lead. But a Shane O’Donnell goal on two minutes put Clare ahead and they cantered on in a commanding manner until the finish.

Carlow did manage to draw level by the fifth but six unanswered Clare points in as many minutes exhibited the control they had on the game. Shane O’Donnell, Ian Galvin, Tony Kelly (twice), David Fitzgerald and the impressive David Reidy all raised white flags, while Carlow were largely depending on free-taker Martin Kavanagh to keep the scoreboard ticking over.

By half time Clare lead 1-12 to 0-9, with Carlow coughing up some scores to simple defensive handling errors. Fitzgerald, O’Donnell and Kelly fired over points on the resumption, extending the Banner’s tight grip on the game.

Over the course of the game ten of Clare’s starting XV got on the score -sheet. All the forwards, both midfielders and two of the half backs claimed scores, whereas Carlow could only muster six points from play all afternoon.

Tony Kelly, who started for Clare at midfield, was given the freedom to roam and he recorded 12 points - five from play - in a man-of-the-match performance.

New team captain John Conlan, though slow to shine early on, came into his own after half time, contributing three points and providing assists on a number of occasions.

Carlow wnow face the daunting task of welcoming Kilkenny to Dr Cullen Park next weekend and after Sunday’s display boss Colm Bonnar will have a mammoth task ahead of him.