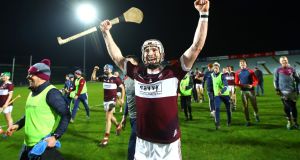 In the last minute of injury time, Brendan Maher completed a masterful performance with his final brushstroke, shooting a point, from under his left side, about five metres out from the left sideline, which few players in their right mind would have dared to take.

In the previous play, after scoring from a free, Maher had split the top of his hurl when chasing down the next puck-out - essentially shooting with a busted weapon, yet still hitting his target bang on. Wow.

In the last seconds, teenage forward JD Devaney shot into the net and in truth only then could Borris-Ileigh begin to celebrate the end line: after a thoroughly supersonic contest they had finally put some proper distance between St Thomas’ and set up an All-Ireland club hurling final against Ballyhale Shamrocks.

The last time the Tipperary champions reached that stage, and won, U2 had just released The Joshua Tree, and their coming in from the cold and wilderness is now almost complete. The defending All-Ireland champions will be a hardy task on Sunday week, but Borris-Ileigh are there and that’s good enough for now.

“It broke from the bottom of the grip down, just split down the middle, so I’d only the full hurl on half the side,” Maher said of his final point: the centre-back finished with 0-10, two from play, narrowly edged for the man-of-the-match by forward Conor Kenny. “So it was fairly bold to strike it. I could just as easily have missed it. I threw it away into the stand straight afterwards, I must go over and get it back.

“Look, I never believed I’d be back in Croke Park wearing the maroon of Borris-Ileigh, to be honest. The county final (after 33 years of waiting) was always the one. We were being talked about as the unexpected team all year, and that was on merit, but we wanted to show that we could play as well. We have an awful lot of skilled hurlers there. We racked up 1-21 which is a good score for this time of the year so we are pleased with that aspect of it. It means everything. This is just dream stuff for us.”

Played out in the fine January twilight, before a crowd of 4,192, Maher’s brilliant scoring was backed up by Kenny (0-3) and Kevin Maher (0-5), his space and movement aided also by the excellent sweeping role played by Dan McCormack. Manager Johnny Kelly, who has previously guided Portumna to All-Ireland club glory, didn’t shy on his praise for Maher.

“To be honest Brendan is one of the greatest hurlers I’ve ever seen,” said Kelly. “He’s a pleasure to coach. There’s no airs or graces about Brendan, he’s a Borris-Ileigh man first, a Tipperary man second, and he doesn’t need any words of mine to recognise how great a player he is.

“Delighted with the overall performance, which we felt was coming all day, after a nervy start, St Thomas’ got the goal after 10 minutes, opened us up. We tried to shut that down, work from there, asked the guys up front to put in a big shift for us, and they did.

“It really is about building energy, bringing it to a head, explode on the day of the game. At certain times we lacked a bit of composure, especially on the pick-up, though the grass was in great condition. Really I can’t say with any authority how the stats racked up, but I do know that work rate was one of the key elements there. Getting over the nerves too, you have to remember we’ve a very young forward line, two 18 year olds, one 20, and another 21.”

The Tipperary champions were holding on to a two point lead going into the final minute of normal, before Maher worked his final magic, and the late injury-time goal Devaney, who displayed his searing pace throughout and also scored one from play, stretching the winning margin to seven.

For St Thomas’, last year’s beaten All-Ireland finalists and appearing in their third semi-final since 2017, the quest to get back there again proved beyond them, not helped by 15 wides in the end. Still there was precious little between them in the first half, properly end-to-end and frantic, marked by superb work rate and a series of terrific points from both sides, plus the one goal, on 10 minutes - a brilliant combination between Darragh Burke and Fintan Burke and finished off by Eanna Burke edging St Thomas’ in front, 1-2 to 0-3.

Not for long: Borris-Ileigh were unquestionably the more economic team in the first half, and struck back with a series of excellent frees from Maher and later points from Kenny and Kevin Maher to finish the first half two points clear, 0-11 to 1-6, points from Oisin Flanagan and James Regan adding to the St Thomas’ goal.

Borris-Ileigh continued that economy and efficiency in the second half, slowly gaining the space and confidence over their Galway opponents, who were still very much in touch, 1-4 to 0-19, after midfielder David Burke hit his first point in the final minute of normal time.

“Stages of the game probably didn’t flow for us,” conceded St Thomas’ manager Kevin Lally. “When we had our purple patch we probably weren’t getting enough scores and any mistake we made off turnover ball Borris-Ileigh seemed to punish us every time. We just didn’t seem to get a foothold in the game.

“We also had 15 wides and our scoring efficiency wasn’t where it should have been at and that was ultimately our downfall.That was the key factor in the game probably.”

Still they were one point ahead in the 42 minute, thanks to another free from Darragh Burke, who finished their top scorer with 0-5: “We didn’t kick on from that, which is the killer right now. No excuses on the day, hats off to Borris-Ileigh and we wish them well going forward.

“I think we also had four goal chances in the first half and there were three left behind us and then our wide count in the second half on top of that. We had eight or nine in the second half. We are disappointed in that we have proven ourselves well in Galway in doing back to back but we would have loved to have kicked on again. There’s no excuses from our side.”